This is what 75 blue-pencilled pages of my next comic, which I've been calling "Mystery Project X," look like: 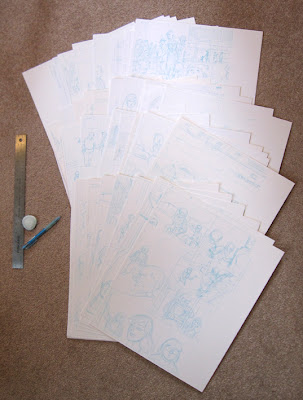 I'm aiming for about 196, so I still have a long way to go. It's slow. Never enough time. Some days I'm enthusiastic and others discouraged. The usual. One reason for posting this picture is to to lay down a marker that'll spur me to see it through. It's good to see it all together like this; picking at it one or two pages at a time does add up. Bird by bird.

Another reason is to reassure anyone who cares that I'm still in the game. Just because you don't see it doesn't mean I'm not playing.

It's also an opportunity to write about Process, which is something I've always done and some readers like. First, it's evident I remain an old-school dinosaur cartoonist who works with paper, pencil and ink instead of photons and electrons. Our numbers are dwindling. For me, analog is a lot more fun and fulfilling than digital. How quaint.

I've already scripted and drawn thumbnail roughs for the entire story, and have them open in front of me when I draw. As is standard, I draw the pages larger than they'll appear in print or online. Shrinking artwork tightens it up and hides its flaws. These originals are 27 x 42 cm. (or will be when I slice off the right-side border of the paper). First I draw with blue pencil, then go over the pencil lines with India ink using brushes and pens. I use light blue pencil because it's nearly invisible to photocopiers and scanners, so I don't need to erase it after I ink. Then I'll scan each page into Photoshop to add lettering, word balloons and coloring, and do whatever editing and clean-up are needed.

I'm trying something different on this project than I did on Mom's Cancer or WHTTWOT: pencilling the entire story first, then going back and inking it (on my previous books, I pencilled and inked a few pages at a time, completing small batches as I went). This solves a few problems. First, a character's appearance naturally evolves as you draw it over and over, streamlining and polishing, so that the same character can look very different between start and finish. I've already noticed that happening with these characters. That'll be much easier to adjust between pencilling and inking than if I had to go back and fix a bunch of already-inked pages. Second, I have some continuity concerns--things that must match at the beginning and end of the story, or build slowly throughout--that are again easier to get right and revise in pencils than inks. Third, it gives me freedom to think of new ideas as I go and weave them back in retroactively.

I think my pencils-first idea is working well. The downside: assuming I persevere in pencilling all 196 pages, I'll be only half done. I'll still have to ink them all.

I'm not on any particular deadline except a constant crushing awareness of my own mortality. That has pros and cons. A deadline, as Sam Johnson said of an impending hanging, concentrates the mind wonderfully. Absent one, I have a completely arbitrary, imaginary target in my head that I think I can hit if I apply myself. It helps.

I'll continue playing my "Mystery Project X" cards close to the vest. Just wanted to let you know that I am working on something and making progress, even if I'm not breathlessly blabbing about it. I'm determined to see it through, although that could change tomorrow. Not sure I have a choice; what else am I gonna do with myself?
.
Posted by Brian Fies at 12:59 PM

Email ThisBlogThis!Share to TwitterShare to FacebookShare to Pinterest
Labels: How I Approach Cartooning, Mystery Project X

What? No comments?
I for one am looking forward to whatever you're up to. You're a good storyteller and have a knack for putting things in clever contexts. And you draw well too.

Heh. Thanks for the comment and compliments. This post got a little more reaction when I cross-posted it on Facebook. But I certainly have no illusion that anyone's breathlessly awaiting my next work, and it's a long way off in any case. I'll get 'er done.