I've been remiss, and almost forgot to keep a promise.

Back in September I was a guest on Jordan Rich's late-night radio talk show on Boston's WBZ and the CBS Radio Network. I mentioned afterward that Jordan had asked me to contribute to his annual For the Children fundraising booklet, which he's produced for 13 years to benefit Boston Children's Hospital. It's a collection of recipes, inspirational essays, poems, artwork and such provided by Jordan's guests and friends. Jordan asked if he could reproduce a page from Whatever Happened to the World of Tomorrow. Instead, I put together a new piece that I think distills its optimistic message. Here's a teaser: 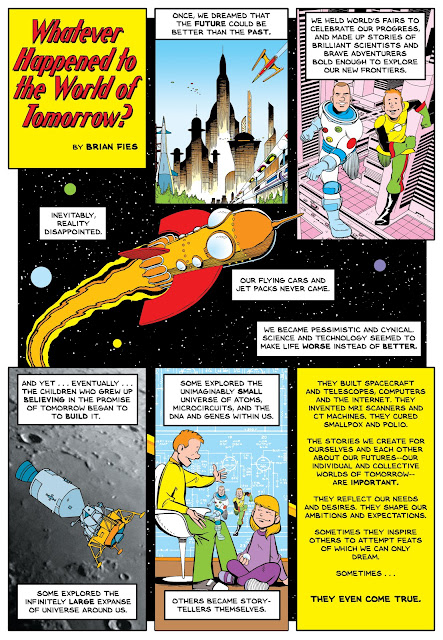 Actually, that's less a teaser than pretty much the whole thing. I stink at marketing. But the booklet's got 27 other pages of stuff from other people, too, and as you're distributing your holiday charity among various kettles and barrels please consider this good cause as well. For the Children 13 is now available here: $20, with all proceeds going to the Boston Children's Hospital.

Thanks again to Jordan for letting me be a part of it!