I was going to let my birthday today pass unmentioned, but my family has already outed me on Facebook. I never told Facebook my birth date mostly to avoid friends and "friends" wishing me a happy one because their computers prodded them to, but it turns out there's no avoiding family.

I'm not a birthday grump. I used to be, when I was a younger man with frustrated ambitions. That's when I adopted Pink Floyd's "Time" as my unofficial birthday anthem and established the ritual of morosely listening to it on my day. So I was startled a while ago to realize I'd grown up to be pretty happy and content, having accomplished much of what I'd hoped. (I think I also realized that some of my ambitions were stupid.) It took longer than I might've liked but I got there. The idea of contentment took some getting used to and still doesn't quite sit right with me. That's fine. Some ambition and angst are good for the soul.

I still keep my "Time" ritual; in fact, I just played it. The difference: now it makes me smile.

In case you're unfamiliar with my birthday song. I just noticed that "Floyd" is one of those words that, if you stare at it a few minutes, starts to look very weird.

Still, I think there's something silly about making a big deal of someone's birthday after the age of 20 or so. Everybody's got one. I don't need gifts, I'm a grown-up; if there's something I really want, I can go buy it myself.

Maybe I am still a bit of a birthday grump. It's hard to separate from my natural ground state of general grumpiness.

My daughters surprised me with an early-birthday visit home last weekend. In addition to the gift of their presence (all I needed of course), they gave me a home-sewn reversible cooking apron with a black-and-white starship Enterprise print on one side and a colorful Marvel comics print on the other. Wonderful!

They also got me one of these: 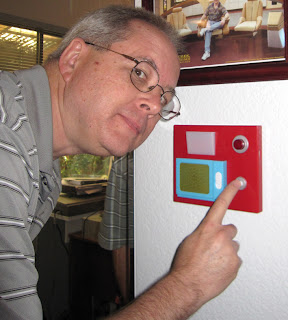 I could name at least four of my readers who need no further explanation. For the rest, here's a hint: 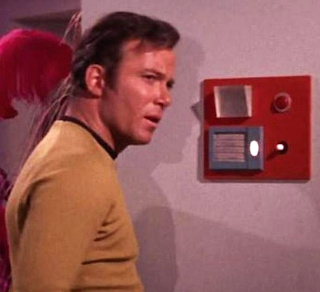 The 21st Century version of the Enterprise Comm Panel doesn't do quite as many neat things as its 23rd Century counterpart but it's still pretty cool. When you push the white button it emits the "hail" whistle. It also has a motion sensor that can be set to sound off either a "red alert" klaxon or Star Trek's sliding door "swoosh!" when someone walks past. I've mounted it near my office door and it always makes me smile, although sometimes when I forget it's there it scares the chitlins out of me, too.

My kids get me. Who wouldn't be content with that?

Tonight Karen and I will have a nice dinner and slice into half a birthday cake (we ate the other half with the girls on Sunday), and I'll open a few gifts from her and my extended family. I do appreciate the gestures. Today I turn fifty-three. It beats the only alternative.
Posted by Brian Fies at 9:34 AM

Quite a cool gift, old man.

Of course, you've probably already reached for the hail button while pretending to hold the hilt of an Andorian knife in your back, sliding slowly down to the floor and moaning, "Security... security team.."

Of course he has!

It's hard to find room in here to execute a flying drop kick after bouncing off the wall, but I've managed it.

Floyd, by the way, is one of English's weirder words. It follows all the rules, but...

And I confess I never would have guessed you were a fan.

Your girls are so clever! And now I'll never forget your birthday - it's the same as my daughter-in-law's!!

And you do need to scan that pic of of you sitting in Picard's chair in "The Star Trek Expeience" so we can all get a better look.

Marion, I'd say I'm more a legacy fan of Floyd than a current one. Their music and message don't particularly resonate with me now but they did once, and I remember that time fondly.

Mary, can't argue with you, my girls ARE clever! But feel free to forget my birthday, no hard feelings.

Jim, I did scan that pic, but it was in 2006 so no shame in not catching it. Here:
http://momscancer.blogspot.com/2006/08/final-frontier.html
There's a pretty good essay to go along with it, too.

Brian:
This as good a time as any to finally thank you for producing your two books, both of which were absolutely wonderful. I've been meaning to say that for several years but just never got around to it. Apologies.
Nothing wrong with being grumpy about birthdays; too many people treat them as mindless rituals (like my oldest brother, who makes mine his one guaranteed phone call each year, supplemented by a call whenever a relative I've never met dies). Tracy and I observe ours quietly and have an iron-clad pact: never, ever give the other a surprise party.
As for Pink Floyd, we have a fantastic tribute band up north called the Freudian Slips who do the "Dark Side of the Moon" album live--the last two times we've seen them they've been accompanied by the Eugene Ballet Company. Great show each time. Your "Time" is my "Knights in White Satin," by The Moody Blues; can't explain it, but Tracy and I have Comcast's '70s Music Channel as our default channel--'70s music wasn't just about disco.
We recently acquired a coffee-table-size copy of "The Golden Age of D.C. Comics," one of a series of similar books about D.C. It's gorgeous.
Happy birthday.
Lloyd Paseman

Nice post, Lloyd. I'm a big 'Knights in White Satin' fan as well. But if Floyd is strange to look at Lloyd must knock your socks off.

Nah, it's been a while since I've seen Lloyd, but he looked OK to me.

Lloyd, thanks very much for your thoughts and please give my best to Tracy! I'd go see the Freudian Slips sometime just for their name. I haven't seen the DC Golden Age book but know it's got some good stuff.

Getting a birthday greeting from someone named Lloyd that includes a mention of Floyd could only be cooler if someone mentions Dan Akroyd, too, so here you go.

Happy birthday whether you want me to say it or not, you ol' grump.

Thanks again, y'all! I'm even older today and still doing fine.

You may have noticed, Brian, that the artist responsible for the iconic Pink Floyd spectrum graphic passed away yesterday. If you hadn't, I'm sorry to bring the news. http://www.latimes.com/entertainment/music/posts/la-et-ms-pink-floyd-artist-dies-storm-thorgerson-20130418,0,3428865.story

Here's that link, clickable this time.

Thanks for the news, I hadn't heard. "Iconic" hardly begins to describe that Pink Floyd cover. I read an article about it fairly recently, and what I took away was that the band didn't contribute ideas or really have strong feelings about the cover art at all. Thorgerson came up with the prism/rainbow, the band said "fine, whatever" and history was made.

"morosely listening" to Pink Floyd? Is there any other way?

Greetings! This type of technology is not too far away. I am looking forward to it for innumerable reasons, but just to maintain contact with those who matter is a good start. Skype has some rather interestingly similar features, as do other communications options. Have faith..., they are coming...