I Drew This, Plus Scouting

I Drew This #2: An old man putting on pants. 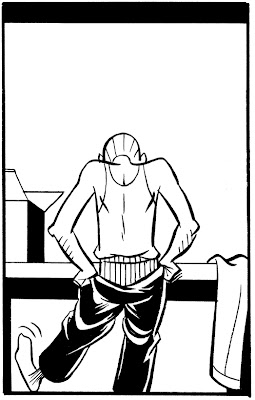 This is about as exciting as "Mystery Project X" gets. I smell a bestseller.

I had a very nice time at the Charles M. Schulz Museum and Research Center last Sunday playing author for a special Girl Scout event. The theme of the day was "Storytelling" and Scouts of all ages came to do activities and earn badges built around it. About 140 girls spent several hours on the grounds, split into two groups so that half were ice skating at the nearby arena while the other half toured the museum.

I sat upstairs with Lauri Day and later Vicki Scott, both of whom I enjoyed getting to know a little (I'd met Vicki before but we'd never really talked). To help keep the younger Scouts on task, they were sent on a two-page scavenger hunt for information they had to find somewhere in the museum, including from Actual Storytellers. They had four questions for us. At first I responded with detailed replies as if I were actually being interviewed. I immediately realized that wouldn't work because a.) they weren't really interested, and b.) some of them could barely print. Our interactions quickly distilled down to the fewest, simplest words possible:

Q. What is your name? A. Brian Fies. You can copy it off my little sign here.

Q. Where do you get your ideas? A. I think about things that are important to me.

Q. How long does it take to write a story? A. A long time. About two years for my first book and three years for my second.

Q. What do you do when you don't have any ideas? A. I have too many ideas, not enough time. Alternative answer: I think harder.

Most of the Scouts were a blur of vests and braids, but some stood out. A few seemed genuinely interested in looking at my originals and learning about the cartooning process. One 8-year-old planted herself in front of my table and started reading Mom's Cancer. When her Mom said it was time to move on, she didn't budge. Finally the girl said, "I want to buy this book" (which I hadn't really brought any copies of to sell). Mom looked at the title, looked at me: "Is it age-appropriate?" Tough question; I answered honestly, "Maybe not." They moved on. But for a couple of minutes, I had her riveted.

Of course the museum was open to regular visitors while the Scouts toured. Among them was a group of nuns, which made an interesting contrast with the Scouts. Old and young women in different uniforms. Two boys, maybe 11 or 12, thought all of us cartoonist-types were just amazing. They kept circling around with such open, sincere enthusiasm I initially wondered if they were putting us on. And they caught me in a snare I'll be more careful to avoid next time.

As the afternoon went on and the Scouts thinned out, the boys asked Lauri and me if we'd race to see which of us could draw them faster. "OK, now you do him and you do me." That was a couple minutes of fun . . . which ominously did not go unnoticed. Another visitor saw what we were up to and wanted her kid's caricature. And in the time it took to do that one, someone else came up. So I spent the last half hour drawing caricatures over my strong and heartfelt protests that I'm not very good at it ("Oh, please, just one more of the little baby, we'll put it on her bedroom wall"). It was horrifying. Everyone seemed happy with their sketches but I'm not falling for that one again. At least no one asked me to draw Snoopy; Vicki does it for a living, but that beagle is harder to get right than he looks.

With that important lesson learned, it was a nice afternoon. The girls, visitors, and museum staff were great. Girl Scouts was a big part of our family's life for a long time (says the 2001 Father of the Year for Girl Scouts Service Unit #18), and in fact Karen's still involved seven years after our daughters earned their Gold Awards and moved on, so it was fun to reconnect. I can't think of any way to not make this sound super creepy, but I just love little girls. They always remind me of young fatherhood, a good time in my life, and the two former-little-girls I love most in the world.
Posted by Brian Fies at 12:08 PM

Email ThisBlogThis!Share to TwitterShare to FacebookShare to Pinterest
Labels: I Drew This

"Lady, cancer is NEVER 'age-appropriate,'" followed by a thousand-yard stare.

Well, that's what made it a tough question for me to answer. I don't know the Mom, I don't know her kid. I deliberately wrote the book to be "appropriate" for as broad an audience as I could imagine but I didn't feel like it was my call. She did seem like an exceptionally smart, perceptive child, but it's possible I only got that impression because she liked my book ;-).

The reason it *might* have been age appropriate is because the little girl was so glued to it. It might also have led to a conversation, or conversations, that Mom isn't ready to have. So, not age-appropriate for Mom, maybe.

Your old man putting on his pants can stand on one leg without falling over. Ergo, he has super-powers. I'd read it.

I love the old man putting on his pants. Sometimes you do something in a panel that just makes me smile and say to myself, "Oh, yeah! That's just brilliant!" Here, it's the whole range of motions that's communicated by just those two simple motion marks by his toes.