I'd call myself less a student of comics history than an interested bystander. If you're interested, Wikipedia's article on the topic is as good as most. Standard histories date the comic book to early 20th Century humor anthologies, and the newspaper comic strip to Hearst's "The Yellow Kid" in 1895. Political cartoons are much older--Ben Franklin's "Live Free or Die" is one example--with credit usually given to William Hogarth around 1720-30. One of comics' unique devices, the speech balloon, first shows up around then.


As I say, that's the standard history. Of course, just as surely as any mention of the Wright Brothers turns up a dozen outraged partisans griping that their guy really flew first, as surely as every mention of Columbus prods someone to champion the Vikings, any claim to be the first comic of this or that sort kicks up an argument.

Some try to discern the origins of comics much deeper in the mists of the past. I'm not sure why. I think sometimes comics lovers are a little embarrassed by our artform and want to dig up a better pedigree. "See, I'm not peasant scum, my great-great-grandfather was a prince!" Others are just honest scholars trying to connect historical dots. It's not unusual to find learned texts on comics that point to the Bayeux Tapestry, Egyptian hieroglyphics, or ancient cave paintings as comics' precursors.

Although very early artwork occasionally displays some of the characteristics of comics, I don't buy it--not unless you want to expand the definition of "comics" to include "any depiction of something happening." None of these examples, in my opinion, shows the essential comicness (comicicity?) of combining art and text to tell a sequential story.

Personally, I've always embraced comics as modern vulgar art (in the old sense of "vulgar" meaning common and unrefined--the art of the people). It's messy, random, free, spontaneous, sometimes dangerous, sometimes tasteless and, until relatively recently, free of academic pontificating and elite taste-setting. I like its youth. Comics is Jazz, man. Dig it!

And that was pretty much my entire position on the subject until this morning, when I saw this: 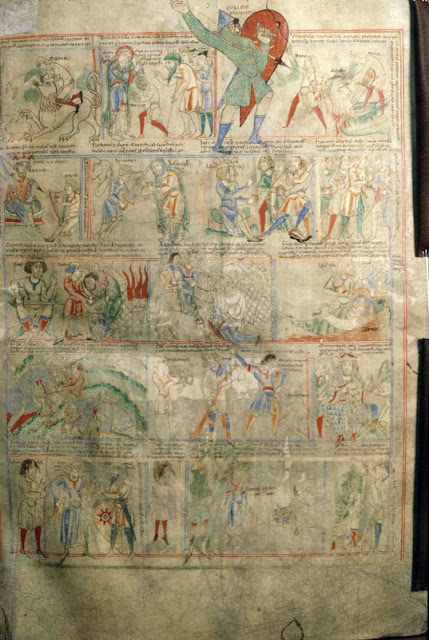 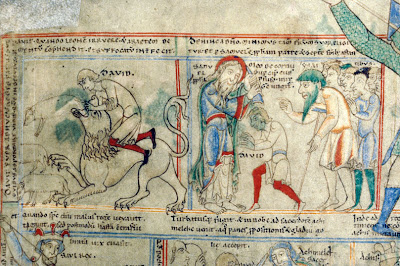 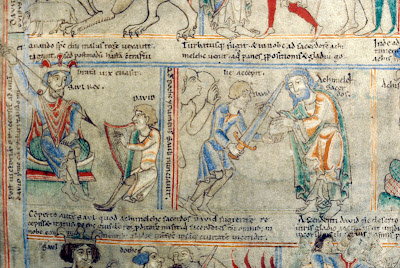 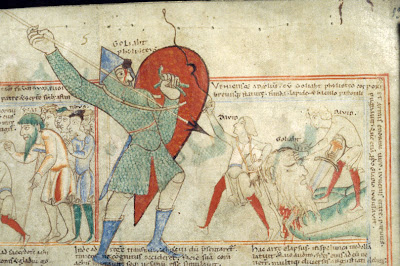 Holy Moley! That's from a 12th Century manuscript called the Bible of Stephen Harding, and as far as I'm concerned, that's a comic!

You read it left to right, top to bottom. It's got panels (boxes), descriptive captions, characters' speech floating around their heads--no word balloons, but you can't have everything. And that bottom picture of David and Goliath, with Goliath's enormous size emphasized by drawing him not only bursting through the panel boundary but far into the border with his spear off the very edge of the page itself, is like something Jack Kirby might've drawn (also notice David's sling snapping toward the top of the page). Goliath looks stunned to find a stone embedded in his forehead in mid-strike. It's magnificent! This anonymous artist wasn't just some primitive proto-cartoonist, he was actually good!

There aren't many days when you learn some new bit of information that changes your entire view on a subject. Today is one for me. I like those days.
.
Posted by Brian Fies at 10:06 AM

Thanks, John. I enjoyed your reports from CAKE. Good to hear from you.