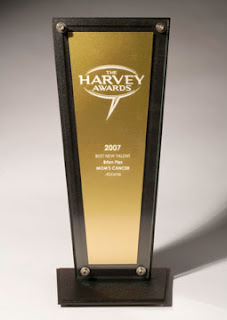 Nice news from Baltimore this morning: Team Cul de Sac: Cartoonists Draw the Line at Parkinson's, a book I was proud to be a small part of (specifically, about 1/150th a part), has been nominated for four of the comics industry's Harvey Awards. It's up for Special Award for Humor in Comics; Best Anthology; Best Biographical, Historical, or Journalistic Presentation; and Special Award for Excellence in Presentation.

Team Cul de Sac was organized by Chris Sparks and inspired by cartoonist Richard Thompson, creator of the comic strip "Cul de Sac," which Richard retired when his Parkinson's Disease symptoms grew too severe for him to continue. It's an anthology of drawings by other cartoonists playing in Richard's sandbox--interpreting his characters in their own styles, mashing them up with their own characters, etc. Sparks found some of the best cartoonists around, most notably drawing out "Calvin and Hobbes" cartoonist Bill Watterson to contribute an oil painting. "Cul de Sac" and Richard's talent were so admired and respected (I wrote my own appreciation of "Cul de Sac" last August) that filling a book with the work of admirers was easy, and I feel lucky that mine was accepted. Proceeds go toward Parkinson's research, and I believe the book has raised more than $100,000 so far.

Other Harvey nominations that caught my eye were my friend Raina Telgemeier's book Drama for Best Original Graphic Publication for Younger Readers, as well as two books from my publisher Abrams, The Carter Family and My Friend Dahmer, competing in the Best Graphic Album Original category. They're both excellent, and deciding which gets my vote will be hard. I also want to give a nod to Best Online Comics Work nominee "Nimona" by Noelle Stevenson, which I discovered when looking over the list of potential nominees and is the only one I've kept up with. It's a futuristic/medieval charmer.

The Harvey Awards, named for cartoonist and editor Harvey Kurtzman, are nominated and selected by comics pros. I got one once. It's neat. For the past several years their awards ceremony has coincided with the Baltimore Comic-Con, as it will this September 7. The full list of nominations is here.
Posted by Brian Fies at 9:09 AM

Well-deserved recognition. And, despite what an august regular reader of this blog famously says about plaques, I hope these graduate from noms to wins.

(Speaking of noms, I've been spending way too much time reading lol-speak. I first read your headline to imply that team members were eating an invisible rabbit piece-wise.)

Thanks for the recommendation of Nimona. I wasn't a fan of the art, but the story certainly is making me smile. I'm adding it to my regular list.

Another one I found recently that had the same effect on me is Lost Side of Suburbia. Might want to take a look.

And of course, congratulations on the four 1/150th nominations!