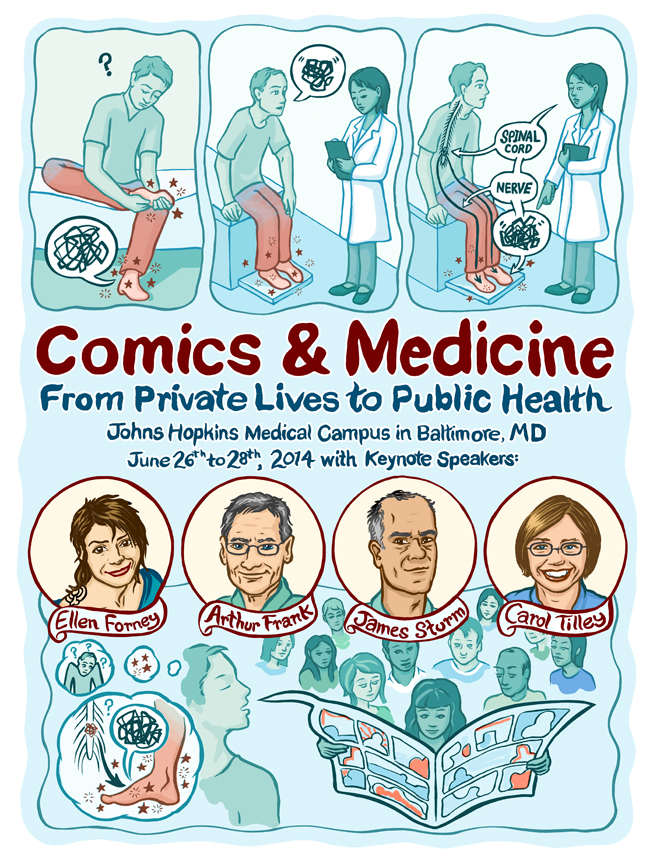 Experience after previous Comics & Medicine conferences has taught me that if I start writing about it, I'll never shut up. It works better to do a photo essay and let the pictures do my talking. Suffice it to say that I returned home from this year's Baltimore conference more excited about the field and the people involved in it than ever.

Graphic Medicine puzzles people ("healthcare and . . . comics?!") and they usually need to see a few examples before they get it. Mom's Cancer is one example, but only one; the reasons people do graphic medicine include storytelling, memoir, therapy, education, and public health. Some still don't get it, but many are quickly converted. As I've often said, one of the things I like best is gathering doctors, nurses, professors, students, writers and cartoonists--groups you might not expect to have much in common--to talk about interesting ideas and projects as equals. It's very cool.

Pictures or it didn't happen.

My midnight flight from San Francisco to Baltimore was an adventure. A two-hour fog delay at SFO made me miss my connecting plane in Chicago. The airline was great about getting me on the next flight, but by the time I arrived I'd been sitting on aircraft or in airports for about 12 hours. Then I had to get to a reception and help open the conference as the last of eight 5-minute "lightning" speakers.

My lightning talk was on "Practicing Graphic Medicine," which I've been doing since I first put Mom's Cancer online 10 years ago. I hoped to provide some context for the conference: before I started the webcomic, only a few people knew my family's story, which wasn't really a story at all because nobody was telling it. I put Mom's Cancer on the Web, and that expanded the story's reach. It was published as a book, which further expanded its reach. In 2010, I was asked to speak at the first Graphic Medicine conference in London, followed by more conferences. I think Graphic Medicine embraces all means of storytelling: oral, web, print; intimate and immediate in the case of the Web, distant and permanent in the case of print. Now it's a Graphic Medicine community. It's a niche field with enormous potential, and it makes a real difference in people's lives.


After the opening hullabaloo, some of us met for dinner at a terrific Afghan restaurant in Baltimore's historic Mount Vernon district, where most of us stayed. Good food and company, but you can imagine how fresh and witty I felt after coming in on the red-eye and being shot out of a magnetic rail-gun to give a 5-minute hyperspeed lecture.

Friday
I didn't take many photos the next day because I kept pretty busy. I gave a 90-minute workshop titled "See One, Do One, Teach One," which applied that old medical school mantra to cartooning. I thought a conference dedicated to comics needed a place where you'd actually learn to make one. The idea was to take people who'd maybe never done so--maybe never even drawn since they put down crayons in the fourth grade--and send them into the world with the knowledge and confidence to not only create their own comics but teach others to create theirs.


I ran out of the 40 little packets I'd made up for workshop participants, so I'd guess I had about four dozen people in a small classroom. Standing room only! I've done variations of this workshop a few times, and how it goes really depends on how willing the participants are to dig in and share their work, which I acknowledge takes guts to do. These guys were tremendous. They made some excellent short comics that really seemed to apply what I aimed to teach, and I hope/think everyone had a good time doing it.

Immediately after my workshop, I moderated a panel of three presentations on the topic of "Private Lives, Public Health." Moderating is usually light duty: introduce everyone, keep them on time, give them a 1-minute warning when they're running out, field some questions. All went well until near the end of the first speaker's talk, when a booming Voice of God blasted from the auditorium's sound system. First thought: the speaker's presentation had an audio file embedded in it. No, she looked puzzled, too. Second thought: the computer had fritzed and begun playing some other file. Nope. As a few of us gathered around the podium and the voice continued to boom, we figured out we were picking up a wireless microphone from another auditorium and eavesdropping on someone else's lecture. We managed to kill the entire audio system but then couldn't get it back up, so the remaining two presenters had to orate the old-fashioned way. Luckily they were game, and good speakers. I still feel bad for the first.

Nobody prepared me for that in moderator school.


Saturday
The next day, my responsibilities were done and I could relax. I tried to take more photos.


Following a keynote speech by Ellen Forney, the day and the conference were capped by a Marketplace similar to a comic convention dealers' room, where participants could sell their own books, prints, whatevers. Local comics shop Atomic Books was on hand to sell several related books, including Mom's Cancer. (Atomic Books also hosted a post-conference event Friday night, Laydeez Do Comics, which I didn't attend.) In addition to sales tables, a signing table was set up so Ellen, conference co-organizer Dr. Ian William, and I could sign our books.


And now a series of photos which on Facebook I titled "Brian Awkwardly Hugging People Who Were Too Slow to Escape":


There were a lot of neat people in Baltimore, including some friends, that I didn't happen to get photos of. Michael Green, Susan Squier, Shelley Wall. If I start listing them, I won't be able to stop. However, I need to mention three: Lydia Gregg, a medical illustrator at Johns Hopkins, did an excellent job of organizing the conference, which unwound with clockwork discipline (but in a nice way). She worked very hard and pulled it off. Also, I was very happy to see Juliet McMullin from UC Riverside, who organized the conference I spoke at last year, in Baltimore with her daughter Sheila, with whom I had a very nice conversation over dinner Saturday.

We have a joke in my family that I head off to each Comics & Medicine Conference swearing that it's going to be my last one, and coming home too excited to wait for the next one. It's not my place to make any announcements, but it looks like next year's conference could be relatively close to home; if so, I think I kinda need to be there. These are my people.

Thanks for this write-up, Brian!! It was so great to see you. Looking forward to staying in touch and to seeing you at the next conference!

It was great to meet you, Brian! Hope we get a chance to meet up and talk again soon.

Thanks for writing this recap. I realized, when an old friend from high school visited me in Baltimore for dinner, that if you haven't been to Comics and Medicine, it can be a hard thing to describe. Now I have this writeup, which I think explains it pretty well, to link to.