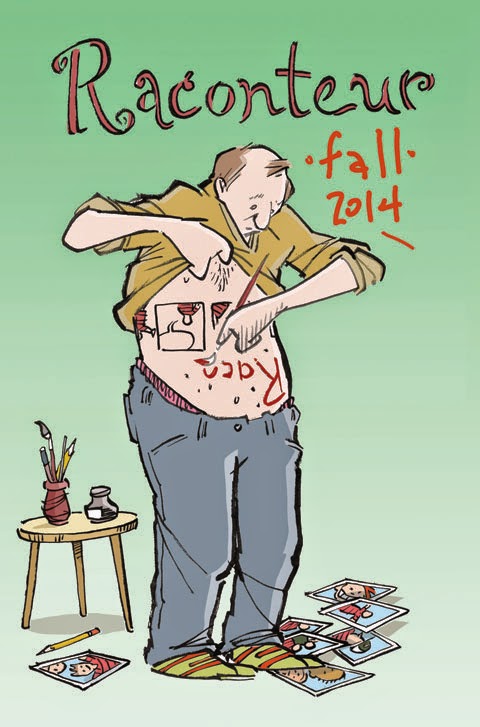 Mike Lynch is a pal as well as a cartoonist whose career I admire and learn what I can from. He's one of a shrinking number of single-panel magazine cartoonists who actually make a living at it. Don't stare too hard at the mythical creature or you may frighten it away.

A couple of years ago, Mike and three cartoonist friends self-published a little zine called Raconteur as an outlet for longer four-page pieces. As the zine's mission statement reads, it's "a collection of true stories written and illustrated by cartoonists who usually specialize in other formats." Very sadly, one of the original Raconteurs, Jeff Pert, died suddenly (at age 55!) last year. A few months ago, Mike asked me if I wanted to be a Raconteur.

When Dorothy Parker asks if you want to join her for lunch at the Algonquin, you don't think twice.

So Raconteur #5 is out and I'm in it. Also in it are Mike, New Yorker-and-other-places cartoonist John Klossner, cartoonist/illustrator Brian Moore, and syndicated cartoonist ("Off the Mark") Mark Parisi. That five--not four but five!--cartoonists for the price of . . . well, I don't really know what the going price of cartoonists is these days, but we don't come cheap, even by the pound.

If you're interested in five little slice-of-life stories, I'd be very happy to sign and send you a copy for $5. Honestly, that's probably asking a lot for a slim 20-page comic, but they're professionally printed (color cover, black-and-white guts), the stories are good, and I'm proud to be in it. Also, postage is included, so that knocks like a buck off the real price right there (I'm only mailing in the U.S. and Canada; sorry, but elsewhere's too much trouble). I'm not looking to get rich, just cover my share of the production costs.

Here's a teaser of my four-page story about a little project my daughters and I did, with the Paypal ordering button right below. Hope you'll check it out! If not, we can still be friends.

Brian, I want one -- but when I tried to order it looks like I have to sign up to PayPal.
I had a paypal account a few years and it cost me an unnecessary several hundred dollars in fees before I could extricate myself. Partly my fault, but I don't want to risk being burned twice.
Nelson

Thanks, Nelson (and thanks to the few people who've already ordered!).

I understand your wariness but don't think you need a PayPal account. When I click on the "Pay Now" button, I see two options: "Pay with my PayPal account" and, below that, "Pay with a debit or credit card." That second option should let you get in and out without signing up for anything.