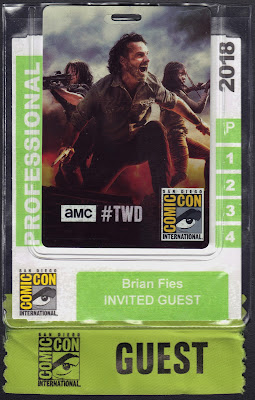 Great stuff, Brian!
Now, if only your blog font was a little larger! ;-)
Mary

Thanks for sharing, Brian. I don’t expect I’ll ever go to a Comic-Con, but I enjoyed seeing through your eyes. Congratulations on your Inkpot Award; it was well-deserved.

Me, too -- I'll probably never go to a Comic-Con, but every year I enjoy your reports and pictures. Thanks so much for giving us the opportunity to share with you. I teared up when I read about your awards being replaced -- that's awesome!

Love the images and commentary, Brian! I was going to make yet another stale protractor joke about your meeting Lyn Johnston, but thought better of it. And speaking of telescopes drawn by masters of the art form, oh,what an absolute treasure that Gordo strip is! If I had it, it would hang all by itself on a wall in the Planetarium with a spotlight shining on it. I envy your possession of it, but of course not what brought it your way.

Where are my manners? It was wonderful bumping into you the way we did on Thursday - and thank you again for you know what. But we also had the pleasure of running quite unexpectedly into your amazing daughters in the elevator of our hotel. We'd not met them in person before, but they saw our name badges and introduced themselves. So Comic-Con's first day was for many reasons a birthday of great surprises and memories!