I recently came across an online auction at a reputable site, and bought two pieces of art I knew I had to have. In fact, immodestly, I can't think of anyone who deserves them more. 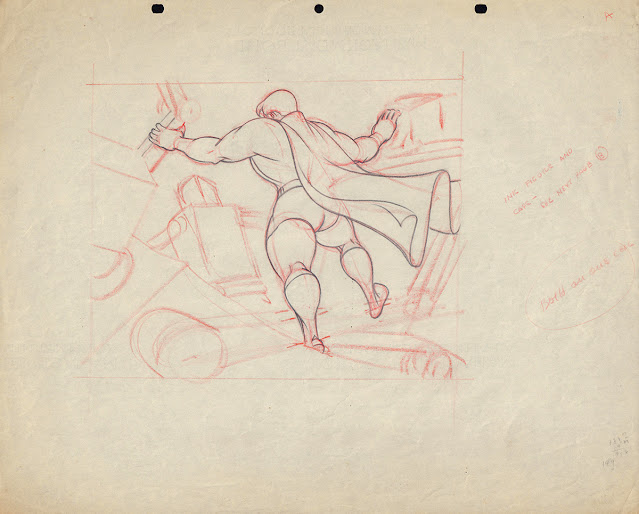 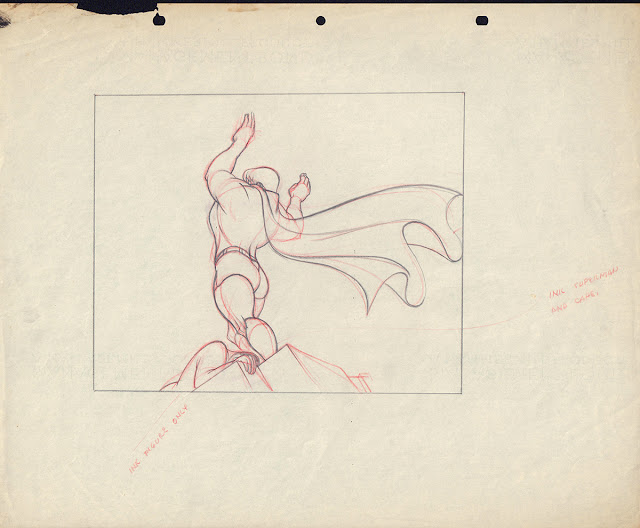 I worded that carefully, because I don't know exactly what they are.

They're not production drawings, which is what they'd be if these scenes appeared in the cartoon. They didn't. The robot designs aren't complete, and in the second drawing you can see what must be the robots' inventor (Sparky!) slumped over his control console, which never happens in the cartoon. Also, a production drawing probably wouldn't include both Superman and the robots, or Superman and the inventor, in the same piece. They'd be drawn separately so they could move independently.

The auction house said they were "believed to be" preliminary drawings made to promote the film, but I don't think I buy that either. Frankly, any ad or lobby card promoting a Superman cartoon would focus on his face and chest insignia instead of his butt.

What feels right to me is that these were animation drawings done at an early stage of the filmmaking process. Then the directors went in a different direction, the script was revised, and new production drawings were done for the cartoon that got made.

I'm confident they're the real deal. They're drawn on large animation paper with three registration holes and a watermark that reads "Management Bond/A Hammermill Product," which is correct for the era. Superman is clearly fighting robots, which he doesn't do in any other cartoon of the time. The figure-drawing style (smooth, round, bulky) is exactly right. They're from Fleischers' "The Mechanical Monsters," no doubt about it.

Regardless of what they were then, what they are to me now is a physical connection to those filmmaking geniuses of 81 years ago who created an animation masterpiece that inspired generations of animators and cartoonists, including me.

I'm honored to be their steward through history for a while.