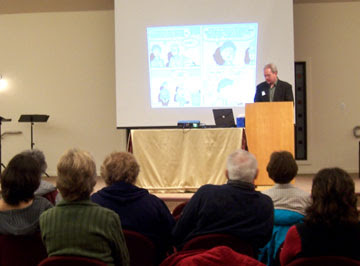 I had a very nice time speaking to a women's group affiliated with a local synagogue yesterday evening (as you can see in the photo above, some of the attendees were men, though we were seriously outnumbered). I think we got a good turnout.

This was a great group, and I was reminded again how much I appreciate people who "get" Mom's Cancer. To readers familiar with comics, it may not seem like there's much to get, but to some civilians the whole idea of a cartoon book about cancer is a mind-blower (never mind that mine wasn't the first nor the last). An advantage I had going in is that I was told much of the group already knew the Pulitzer-Prize-winning Holocaust story Maus, which is a real handy peg to hang your graphic novel bona fides on. Anyway, I talked a little about that--Why tell this story as a comic?--as well as my family's experience, and although I felt my talk was a bit rusty it seemed well received. The discussions with people afterward were heart-warming and very gratifying. Y'know, I've done book signings with turnouts of just two or three people but never been disappointed, because those two or three people invariably say something that reaffirms my reason for writing the book and makes the whole thing worthwhile.

I also got my first look at the reprint of Mom's Cancer last night, shipped hurriedly from the overseas printer just in time for the event. It looks great! I haven't written much about the reprint because there's not much to say. The book is now part of the new Abrams ComicArts family and Editor Charlie and I made a few cosmetic changes, but the story content is exactly the same. Unfortunately, we had to raise the price two bucks to $14.95. Also unfortunately, Mom's Cancer has been out of stock at Amazon.com and other online retailers while stock transitions from the first edition to the reprint (although new and used copies from other sellers remain available through Amazon and the others). It'll be back in stock as soon as the boat docks, and Charlie assures me that he intends to keep Mom's Cancer in print for a long time to come.
.
Anyway, my thanks to the women of Shomrei Torah and to Dena, Sandy and Ellen who made it happen.
.
Cartoonist in Chief
While I appreciate the significance of Barack Obama's election, I haven't been particularly giddy about it . . . until now. Today I learned that, in addition to his evident political skills, our next president is also a cartoonist. Mr. Obama doodled the portraits below of senators Chuck Schumer, Harry Reid, Dianne Feinstein, and Ted Kennedy on the Senate floor.
.. 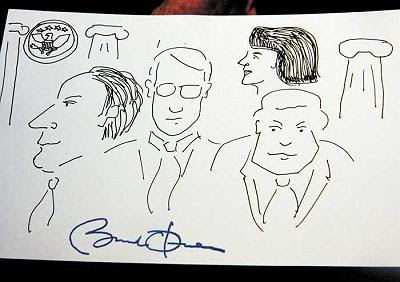 They're pretty good likenesses. If this whole Leader of the Free World thing doesn't work out, he could probably get a job drawing caricatures at the county fair. By the way, this drawing recently sold at auction for $2075. Worth every dime, I think.
.
Voters Veto Bush Sewage Plant
Voters in San Francisco rejected Proposition R, the measure to name a sewage treatment plant in the city after President Bush, which
I wrote about in July. I don't know if voters' rationale was the same as mine, but the proposition failed 70% to 30%. Good for San Francisco.
.
I tried to think of a clever pun for that little blue subhead up there, but everything I came up with involved the word "flush." And that's not right.
.
Posted by Brian Fies at 7:57 AM

Sounds like a lovely presentation. "Hanging your bona fides on MAUS;" a wonderful turn of phrase!

Obama is a cartoonist and a STAR TREK fan too! I've hear he collects Spider-Man and Conan comic books. If he starts his own blog, I'll be in trouble!

I would have loved to have been at the presentation, Brian.

Thanks, Mike. Fortunately, I think Sen. Obama has his hands full right now. Plus, I doubt he knows that Mark Lenard was the only actor to portray a Vulcan, Romulan AND a Klingon, so you still have an important role to play on the Web.

Sandra, thanks also. I would love to visit your part of the continent sometime, I've made a disproportionate number of Internet friends up there. I appreciate you dropping by.