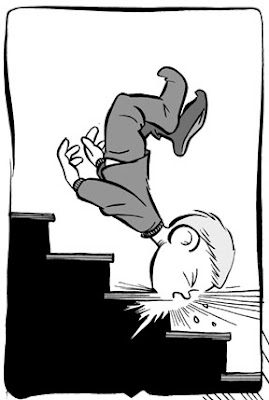 Raina Telgemeier is a talented cartoonist, a nice person, and a friend--as good a friend as you can be with someone you sat next to at an awards show and run into once or twice a year, anyway (I don't want to presume too much). She's done graphic novel adaptations of the very popular "Baby-Sitters Club" books in addition to many other projects, and her art has a cleanness and sincerity I really respect. I like the work she and her husband Dave Roman do very much.
A few years ago, Raina started writing an autobiographical webcomic titled "Smile," about her teeth. She knocked out her front two at age 11 and went through years of dental reconstruction. It's a sweet little story of small moments and the humiliations and horrors of youth that stick with you and hurt much longer than they should.
Raina added regularly to "Smile" online over many months, and occasionally had friends draw guest strips in which they either commented on her dental drama or told their own. When I saw Raina at Comic-Con International last July, we talked about "Smile" and how surprisingly universal and popular it had turned out to be. Everyone has a tooth story. Me, too. So I asked Raina if I could do a guest strip for her sometime. Surely thinking I'd never follow through, she agreed.
I followed through a few weeks ago. My timing couldn't have been worse or better. Worse, because Raina had just stopped posting "Smile" comics and updating their website. Better, because the reason Raina stopped posting new work was that she'd just sold her story to Scholastic, the publishing giant that will no doubt put "Smile" into the hands of millions of kids and make her a star.
Anyway, Raina was kind enough to post my one-page guest strip anyway. Here it is. My tooth story.
In terms of cartooning, the only thing I want to point out is that this was the first time I'd tried drawing freehand panel borders with brush (as seen above). I wanted a loose, casual feel for my little wispy slip of a story, and ruled borders seemed too rigid and confining. These freehand borders are me trying to be Walt Kelly. And then failing.
. 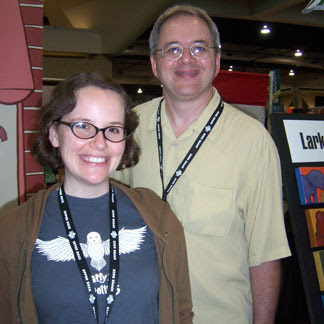 I never thought I'd say a cartoon about getting teeth knocked out was darling... ...but that guest strip was darling.

Everybody has a tooth story, all right.

My now 14-year-old son had a problem with his baby teeth falling out late or not at all. One day the dentist told me that he had 26 teeth. "How many should he have?" I asked. "Twenty-four," she answered. Oops. Extractions, palate spreader, two years of braces and regular ortho appointments, and finally a retainer that at this point he only has to wear at night. Raina's memories of the dental impression are exactly the same as his - awful, awful stuff.

My story: I fell down the stairs when I was three or four. At the bottom I banged my cheek against a table leg. A week later one of my premolars had started to turn grey. It was extracted and for years I just had a hole there, which was useful for goofy tricks in the school lunchroom, but I was glad when it grew back. Maybe because of that fall, or because of another fall playing leapfrog with my brother, or for no reason at all - the cause depends on who you ask - my two permanent front teeth came in crooked. My parents made it clear that braces were not in the family budget. But I played trombone for nine years and the steady pressure of the mouthpiece seems to have helped them move into a more reasonable position. My friends assure me my crooked teeth are "charming". I sure don't want to go through the ordeal of braces for what's really a little cosmetic issue, not after seeing it up close and personal....

You're doing it in that photo Brian. It's a sort of strained smile. As a matter of fact it's a little like Mulliner's chilling smile in the P.G Wodehouse story The Smile that Wins - as if you know our most secret secrets...

Your comic is great. I have to say I like Raina's work for the same line-clear reasons you do. There is also also hope in the faces of her characters - is that a daft notion?

My tooth story is revolting and not even a story. I was reminded in my 20s by an old classmate about how they gathered around to watch me display my "tooth". I had buried the memory. It was a sort of mini tooth on the end of a small black string that hung between the gap between my two front teeth. I would deliver the mutant mini tooth from behind the curtain of real chompers on my tongue. I don't know how my dentist got rid of it, and the gap is pretty small.

Cindy: Ever think that maybe having two extra teeth was your son's mutant superpower? Maybe the American Dental Association should start recommending brass instruments instead of braces.

Rod: You really know how to hurt a guy. Or compliment him. I know what you mean about Raina's art, which I think reflects her personality--like good art should.

I had to blog about your blog on my blog. I didn't even know you and Raina knew each other. Small cartoony world.

I now have to read that Mulliner story Rod referred to!

This all very meta-world. I was going to say "we can't go on meeting like this" but I believe we can.