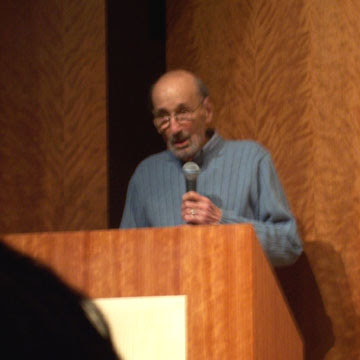 Karen and I went to the Schulz Museum last night for a members' reception and talk by the much-honored cartoonist Mell Lazarus, creator of the comic strips "Miss Peach" and "Momma" as well as a bunch of novels, plays, and screenplays. He's won just about all the awards the National Cartoonists Society can give, including the "Silver T-Square" for outstanding service to the profession. Mr. Lazarus was born in 1927 and is as lean as a broomstick--I understand he's had some health problems in recent years--but was very sharp and funny both in his prepared remarks and off-the-cuff asides. It was great to see him.
.
Although Mr. Lazarus did his school-themed strip "Miss Peach" from 1957 until 2002, "Momma" (which he started in 1970 and continues today) is clearly his labor of love. He told very funny stories about his family and his own mother, the model for "Momma," who regularly extracted "deathbed" promises from her children to, for example, take her to lunch next Friday, before miraculously recovering. Who kept a suitor dangling for years, making him sit at one end of the sofa while she watched a small television--turned so only she could see it--at the other. Who couldn't understand why a boy ever needed a wife when he had a perfectly good mother to take care of him.
. 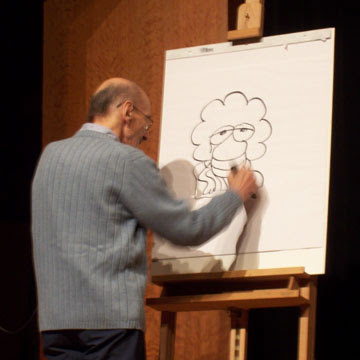 Lazarus drawing Momma. Sorry the pictures are blurry;
the light was dim and I didn't want to use a flash.
I enjoyed one story Mr. Lazarus told about starting his career after dropping out of high school at age 16. It was 1943 and World War II was on. He figured that since most of the cartoonists 18 or older had been drafted, he had a two-year window to fill the voids they left before it was his turn to go to war. His strategy worked. He got some experience and, from 1949 to 1954, worked for the studio of "Li'l Abner" cartoonist Al Capp. That job gave him the material for his first novel, The Boss is Crazy, Too. I also enjoyed one of his asides, as he stepped back to look at one of his sketches with apparent dissatisfaction and quipped, "I draw better when I'm getting paid for it." (I'm stealing that one.)
.
I wrote once that the nice thing about being a member of the Schulz Museum is that you don't have to go out of your way to see great cartoonists. Sooner or later, they all come to you. Mr. Lazarus is one of the field's elite veterans and it was a delightful honor to see and hear him last night.
Posted by Brian Fies at 5:27 PM

The next-best thing to being a member of the Schulz Museum, I'm thinking, is to know someone who blogs about his visits there -- and I don't have to pay for it!

Seriously, thanks for the post. You mention that "Mr. Lazarus is one of the field's elite veterans," and he's well-loved by many therein, I gather. Do you remember when Wiley Miller used to post regularly to racs? IIRC, he stopped doing so because some one or ones of us had the gall to criticize some of Mell's work. Wiley could handle our savaging of his own stuff, but not that of Lazarus.

You're welcome! Glad you liked it. I do remember that kerfuffle on racs but don't recall if that's what chased Wiley away. My sense was he quit posting (as have other pros) over a general sense of frustration. Like, "this is not worth the aggravation."

(For anyone eavesdropping, "racs" is the Usenet newsgroup rec.arts.comics.strips, where comics are vigorously discussed and Sherwood and I met.)

As my own cartooning kind of transitions from amateur to semi-pro, I do find myself becoming more circumspect in public. First, I've met a few pros who've become friends, and I avoid some discussions on racs simply because they're about people I like. It's easy to tear into a comic strip when you're a fan; it's harder when the strip's creator has written you a nice note or bought you lunch. I've also learned that, more often that you realize, those people read what we write about them. So I try to follow the Golden Rule.

Also, while I've always had an innate respect for anyone who cartoons for a living, my esteem for them has only increased tremendously as I've gotten a taste of it myself. I can understand how a reader might look at Mr. Lazarus's work and casually criticize his humor or style. But what I see is a man who's operated near the top of his field for more than 50 years, much of that time doing two strips at once. He's a giant.

Besides, Mr. Lazarus is a past president of the NCS and, I am told authoritatively, knows where all the cartooning bodies are buried. I also hear he was a real hell-raiser in his day. So I get where Wiley was coming from.

Wise words, Brian, and ones I'll keep in mind the next time I'm critiquing a strip.

In my early days on racs, I wrote with great wit and glee about a particular strip and got a hurt little email from the artist that brought me up short. And makes me wonder what others are thinking as they read through the clever japes. Samuel Johnson said that a fly may sting a stately horse and make him wince, but the one is still a horse and the other only an insect. Not that Johnson was much more than an insect himself, but there you have it.