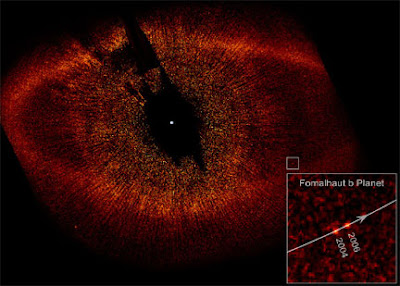 It may not look like much, but I've been waiting most of my life to see a picture like this. The Hubble Space Telescope has taken the first direct photo of a planet orbiting another star and there she is, a speck in the small white box toward the right. Named "Fomalhaut b," this little beauty is about 25 light years from Earth--right next door in interstellar terms. The planet is about three times the size of Jupiter and lies far, far away from its star Fomalhaut, 10 times the distance of Saturn from our Sun. It takes 872 years to orbit. That's a looooong year.

Let me explain a few things about the picture. The star Fomalhaut is located at the center, where the white dot is. But, because the star is a billion times brighter than the planet, the telescope blocked out the star's light with a little metal bar so it wouldn't overwhelm dim objects nearby. That bar is the black blotch that runs from the center to upper left. The orange oval is a real feature, a ring of dust that circles Fomalhaut and is partly defined by the planet's orbit. And the inset at lower right superimposes two pictures taken 21 months apart which prove that tiny little dot is actually moving around the star.
.
You might be thinking that scientists have discovered new alien worlds around other stars before, and they have. But until now they were all detected indirectly, by measuring how the gravitational pull of an orbiting planet affects the motion of its star, making it wobble as it moves through space. That's interesting and cool, and in recent years has resulted in dozens of new finds. But this . . . well, there's no substitute for seeing something with your own eyes.

If you're interested, click here to go to an official announcement with bigger pictures. Of course this is just the beginning. Astronomers will refine their techniques and improve their instruments. Sometime in my lifetime I would not be surprised to see a clear photo of a little blue and green planet that looks a lot like ours. Wouldn't that be something?

What a great time to be alive.

(Note to my girls: And Bonus! It looks just like the eye of Sauron!)
Posted by Brian Fies at 12:41 PM

OMG you totally took "Eye of Sauron" right out of my mouth. (Or off my keyboard, as it were.)

Cool, cool, cool, cool, cool!
They need to do something about the name, though. The first real photo of an alien planet and they name it Fomalhaut b? Sounds like an antibiotic.
I want to call it Boca de Pesca

They should officially name the planet Sauron.
:^)