Gravity: Not Just a Suggestion, It's the Law

Here's how I got into the lucrative museum display game.

In 2012, I built my first interactive display for a museum. My daughter Laura is on the staff of the USS Hornet Aircraft Carrier Museum in Alameda, Calif. That's the ship that picked up Apollos 11 and 12, so they've got some nifty Space Age artifacts. Laura was redoing the ship's Apollo Exhibit, and I got to build a box comparing gravity on Earth to gravity on the Moon (one-sixth as strong) via the highly scientific means of pulling handles that look like Wile E. Coyote TNT plungers.


It turns out that kids love making a lot of noise banging and clanging things. Who knew?

Enter a gentleman named Ken Winans, who serves on the Hornet's board of directors, has one of the largest private collections of space artifacts, and runs a small storefront museum in Novato, Calif., called the Space Station Museum where Laura worked for a while. Ken recently opened a new room nearly filled by a 9/10th-scale replica of a Lunar Module. A few months ago, Ken contacted me and said, "Hey, what would it take for you to build me one of those boxes?" As it turned out, not much.

So three summers after I built my first "Gravity Box" I built my second in my driveway, and immediately hit a snag. My plans and notes from my first box were lousy. My dimensions weren't clear, my diagrams didn't match the photos; hey, I made it up as I went! So the first thing I did was send Laura up to her Apollo Exhibit to measure the prototype for me and reverse-engineer how I put it together in the first place.

After that, it was a breeze.


This time I took thorough notes and carefully documented every step in photographs, absolutely guaranteeing that nobody will ever ask me to make another one again.

If you'd like to play with an Original Fies Industries Gravity Box™, visit the USS Hornet anytime OR drop by the free Space Station Museum some weekend. In fact, I'd recommend next weekend because Ken is hosting his annual Novato Space Festival on Saturday, August 1, from 10 a.m. to 4 p.m. You can meet astronauts and NASA scientists there, and see all kinds of cool stuff. Did I say FREE?!

This was a fun project. 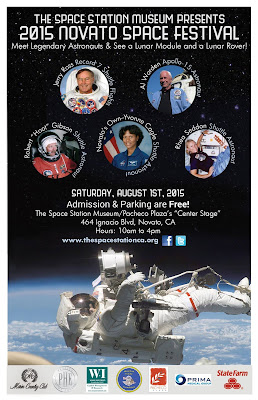 Very cool. I did grit my teeth, however, at "Because the Moon is smaller and less massive than Earth, the force of gravity at its surface is about one-sixth as strong." That is likely to leave the impression that the size and mass differences both contribute to making the moon's surface gravity weaker than Earth's. But the size difference works in the opposite direction: g = GM/r^2 after all.

Of course you're right. Thanks for volunteering to do the next one!