I've mentioned that I took on the first assistants of my career to help me finish WHTTWOT. Here's how that happened:
.
Coloring comic artwork with Photoshop takes some effort. It has to be done right, especially when destined for four-color print, and I had particular ideas about the palettes and techniques I wanted to use on this book. At least the way I do it, coloring can be a two-stage process in which flat colors are first laid down to define areas--at that point it almost doesn't matter which colors they are--after which their values are refined, details are spotted, effects are added, and so on. It's easier to start with something than nothing.
.
Mom's Cancer had just 26 color pages, some with only a dab or two of tint. It was still a chore. WHTTWOT has 200 full-color pages. I realized several months ago that I could use some help. I also realized that summer vacation was coming up and I'd soon have all the necessary talent close at hand.
.
My 20-year-old girls, Laura and Robin, are very good artists. That's not just Dad talking, it's objectively true. They've been friends with Kelly and her younger sister Kristen, also talented artists, since high school. When the four of them get together, they spend most of their time writing stories and drawing pictures. (I know: "Where did my parenting go so wrong?") Best of all, they all know Photoshop better than I do. It's not uncommon for me to walk past one of their computers, look at the screen, and ask, "how did you do that?" Their software is four versions newer than mine. When everyone got home for their respective colleges' breaks, I made them an offer and they accepted.
.
So throughout the summer I copied black-and-white art files to flash drives, provided the appropriate palettes, drew up quick color guides, and passed out assignments. I tried to leave them some latitude to apply their talents--I wanted more than robots doing paint-by-number. I suspect the work frustrated them because slabbing in rough colors barely drew on their skills at all. They had to hold back. They nevertheless did a great job, completing nearly 100 pages faster than I could supply them and often surprising me with their initiative and creativity. It wasn't unusual for me to open up their files and think, "Huh. I wouldn't have done it like that, but I really like it!" Even when their choices didn't work for me, just giving me something to react to was more valuable than I expected.
.
So my first experience hiring assistants went very well. One nice dividend is that Kelly and Kristen plan to attend art college next year to become computer animators, and I like the idea that I was able to give them their first professional credit. It's not much, but I know from my own freelance writing that small jobs accumulate into bigger and better ones and, if you're not careful, can actually grow into a career.
.
Another nice dividend was that when my story called for four girls sitting in a soda shop in 1965, I knew where to find my models: 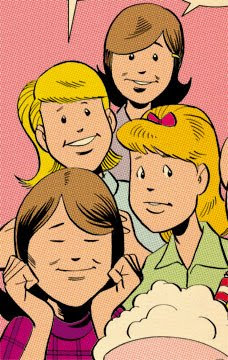 Top to bottom, Kelly, Laura, Robin,
and Kristen. Keep in mind, this is how
I humiliate people I like. You don't
want to get on my bad side.

Email ThisBlogThis!Share to TwitterShare to FacebookShare to Pinterest
Labels: Friends Family and People, Making a Book

This is so cool!. You're right about getting those first credits. The first woman who ever paid me to write (commentaries for CBC Radio) still inhabits a very special place in my memory, as does one of the first men to regularly hire me to write stories for his agricultural magazine. (One of my first paid writing gigs was reporting on a bull semen auction. Ah, happy days.) Those things laid the foundations for my career and you never forget the people who take a chance on you and do that for you.

Absolutely. I had those people early in my career, too, and look back in wonder at what ever convinced them to give me a shot. I'd like to think I could be that guy for someone else once in a while. Pass it on.