Bob Thompson of The Washington Post has written probably the most comprehensive and best-sourced article I've ever read about the rise of graphic novels, what they are, and "what it all means." He interviewed anyone who's anyone in the business (though it's curious that he wrote about preparing to interview Pantheon's Chip Kidd--who was responsible for one of the most delightful evenings of my life--but I don't think mentioned or quoted him subsequently).

Thompson comes at it from an interesting perspective, that of a self-described Prose Guy earnestly trying to figure out what the fuss is all about. He avoids most of the easy journalistic cliches such as "Gee, comics aren't just for kids anymore!"--Thompson already knew that--and comes to appreciate the skill and talent involved in the best graphic novels while still feeling that they maybe aren't quite his cup of tea. I thought it was a unique and honest approach.
The long article starts here; you may have to register (free) on the Washington Post website to enter, although I was able to access it directly. And don't miss the best part, a three-page comic written by Thompson and drawn by Jonathan Bennett illustrating the article's highlights. Here's a sample panel:
. 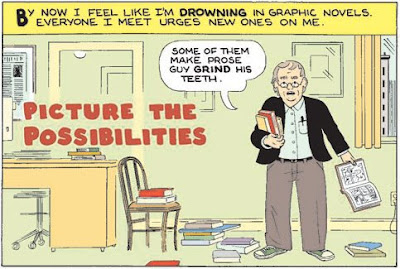 Once in a while I do a convention panel or am asked a question about The Rise of the Graphic Novel. The problem is, my perspective is so narrow and the field so large that it's hard to grasp it and really come up with something insightful to say. I think that's true for most writers and artists: they know their little corner of the universe but don't or can't focus on the big picture. As one Prose Guy's attempt to figure it out, I think this article is a very interesting, informative, and worthwhile read..
Posted by Brian Fies at 1:52 PM

This was an excellent article and I thoroughly enjoyed it (the comic too). Thanks for the heads-up.

(In other news, I got your email last night [have been having some trouble again with my email service, which I am changing next month, my contract with my hosting service finally having expired] and will get back to you this evening.)