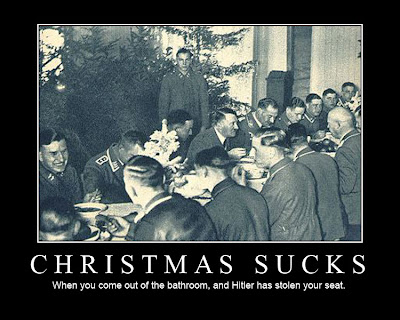 Christmas sucks . . . when you come out of
the bathroom, and Hitler has stolen your seat.
See, the funny part isn't Hitler, it's the hapless shmoe standing behind . . . oh, never mind. I laughed.

We've got a New Year's Eve tradition around this here blog of expressing gratitude for people whose work, friendship, support, and love made the past year better--and then waking up in the middle of the night panicked and horrified for forgetting someone. While I always reserve the right to go back and edit posts, this one will probably need it more than most.

Top of the list is my immediate family--Karen, Laura, and Robin--and my larger family of sisters, dad, aunt, in-laws, cousins, and nephews. Because what kind of man would I be if I didn't list family first. Like I didn't last year.

Friends, acquaintances, and fellow travelers in the comics world, including Mike Lynch, Otis Frampton, Jeff Kinney, Patricia Storms, Paul Giambarba, Guy Gilchrist, Stephan Pastis, Raina Telgemeier, and many others (including Jerry Scott, Rick Kirkman, Al Jaffee, and Mark Evanier) whom I may have met only briefly but have been invariably kind and encouraging. Others whose blogs provide regular entertainment and education. Also, ToonTalk, rec.arts.comics.strips, and the Wisenheimers for their camaraderie and complaining.

Friends who did me the great favor of reviewing early drafts of my next book and making many good and insightful suggestions, including some people already mentioned plus Mike Peterson, Sherwood Harrington, Ronniecat and her Dear Husband, and Marion Deeds. It may go without saying, but I should say anyway, that I wouldn't have asked if I didn't respect their opinions. Even if I later ignored them. While I'm on the subject, my daughters' friends Kelly and Kristen joined them in helping me get Whatever Happened to the World of Tomorrow? done on time and better than I would have by myself. They're also sleeping in my family room right now.

Speaking of the new book, I owe it--and this whole sorta-semi-career I seem to have going--to my friend and editor Charlie Kochman, who's got a real Jedi-Socratic method of getting what he wants while making it seem like it was your idea. Neat trick. Many people at Abrams have been very hands-on and dedicated to making WHTTWOT a book we'll all be proud of, including executive managing editor Andrea Colvin and designer Neil Egan, with whom I've worked most directly, and many others with whom I'll be working in the coming months. And I must mention Charlie's fiancee Rachel, who hasn't had much to do with publishing my book but is terrific anyway. 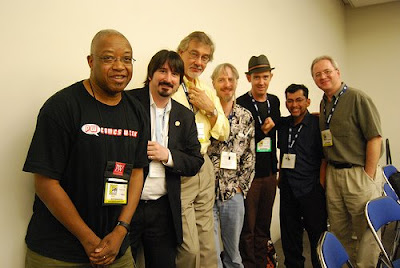 A highlight for 2008: Introducing the Abrams ComicArts imprint and its slate of upcoming books at the San Diego Comic-Con in July. Left to right were panel moderator Calvin Reid from Publishers Weekly, Charlie Kochman, Denis Kitchen, Craig Yoe, Jordan Crane, Jaime Hernandez, and me.

People who read Mom's Cancer, told their families about it, and bought copies for friends. Professionally, hardly anything makes me happier than someone telling me they used to have my book but lost it when they loaned it to someone who needed it. While I hope my next book does well and I go on to write and draw many more, I don't expect anything I ever do to elicit such a profoundly heartfelt response.

Regular readers and, especially, commenters on this blog. Thanks for being there.

My "real life" friends who suggest lunch dates, invite me to parties, drop me e-mails, and otherwise make sure I have a life despite all evidence to the contrary.

Everyone I forgot. It's not you, it's me.

Here's something I found on Mark Evanier's blog and enjoyed. I don't know who "Uncle Jay" is, and his website isn't very forthcoming, but I liked this. Happy New Year.

I laughed at the poster too. That's one disoriented-looking guy behind the Furher. I doubt the next frame on the roll shows him tapping Hitler on the shoulder and saying, "Um, excuse me..." Rather, he probably sidles through the kitchen door to hide among the servants.

Thank you, thank you for including us in the fortunate few who got to preview Whatever Happened to the World of Tomorrow? It was a sheer pleasure and we don't deserve to be thanked for the privilege.

Uncle Jay is a national treasure and I'm so glad you introduced him to us!

Happy New Year and all the very, very best in 2009 to the Family Fies and their entire large circle of friends. Especially Charlie and Mrs. Charlie-to-be and the rotating cast of cartoonists, entertaining supporting characters in the blog.

Yes, thanks for your original graphic novel and for letting us have a peek at the next one.
I also owe you one this way: The illustrations from your original blog inspired me to add illustrations for my mine. This in turn has led to good things in my life, including people I've met and skills I've learned.
So thanks, Brian.

Oh, and the other stuff is top-drawer, too. G'bless, and happy new year.

Thank you, Bud! It has been my honor to work with you these last few years. More than working together, your friendship means the world to me. I can't wait for readers to get to see your new graphic novel. [Trust me, loyal blog readers, it's genius!] All the best for 2009! And THANKS!

Awwww...thanks for the mention, Brian. Though it's a little late (I'm so behind in reading blogs, and just can't get my mojo going this year) I wish you and your family a very Happy New Year. I know that this year will bring you many more wonderful blessings, because you are such a talented, wonderful guy.