EDITED LATER TO ADD: Readers referred here via Tom Spurgeon's "Comics Reporter" blog (thanks, Tom) can find the entire Abrams spring catalog here. Scroll through to Page 70 to see the Abrams ComicArts material. The brochure to which I refer below doesn't appear to be available online. Thanks!


Abrams ComicArts, the new imprint of publisher Harry N. Abrams, just released a 48-page full-color brochure introducing its inaugural line-up of books coming out in the spring. Astonishingly enough, eight of those pages are dedicated to WHTTWOT: 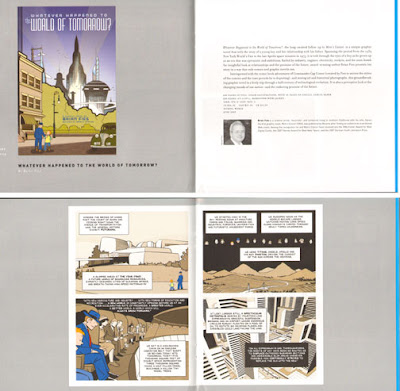 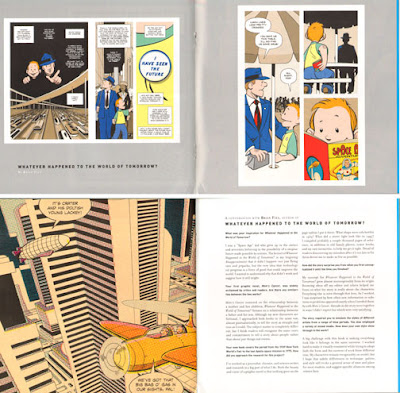 No high-resolution scans for now: I'm not sure Editor Charlie would approve, plus I'd like to tease you a while longer. But this is really very cool. The brochure has already drawn some press attention, and I've received a couple of nice comments from pros I respect who've seen it. This is Abrams ComicArts' coming out party, and from my narrow perspective I think it's a hit. I'm also buoyed by this show of confidence. Eight pages is a lot of acreage to dedicate to one book!

I wanted to mention a bit of trivia--a backstage exclusive available only to readers of this blog, if you will. See those futuristic cityscapes taking up the bottom half of Page 4 and all of Page 7? They're the same drawing, which is deliberate; an attentive reader might look at the second one and think, "Where have I seen that before?" and flip back 10 pages to extract a bit of extra meaning from the story. It's all right if they don't, but it's a little reward for those who do. I drew it on November 21, 2006; I know that because
I blogged about it at the time, although I didn't mention what it was for and hadn't yet hinted that I was working on a new book.

as you know by now, publishers endeavor to use their money very, very wisely, and only throw it at projects they feel strongly about...nicely done, BF.

and, frankly, i love the dynamic style that's evident in your tease of a preview.

8 pages! That's awesome. They must have a lot of optimism about the book. Well-deserved, I'd say.

Mike H., it's always great to hear from you. I hope all's well with you and your work.

Patricia and Ronnie, thanks! Eight pages in a brochure (and two pages in the main Abrams catalog, which I haven't shown yet) is indeed a nice sign of optimism. I hope not to disappoint.

Thanks for the preview.
Nice trick with the recycled background. I also like the choice of colors. Can't wait to see to see this book...!