Aunt Fritzi is a Fan!

All right, this is one of the Top Five Coolest Things that's ever resulted from my semi-career in comics: cartoonist Guy Gilchrist, who currently does the classic comic strip "Nancy," gave my new book a shout-out in today's strip! In the final panel, Nancy's Aunt Fritzi (who became quite a fox sometime in the past 70 or so years) is reading a book whose title rang a bell: 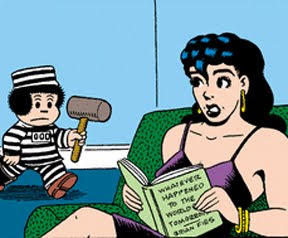 I met Guy in 2007 when I went back east for the opening of an exhibition of original comic art (including mine) at the Norman Rockwell Museum in Stockbridge, Mass. We'd become acquainted online but weren't really pals when I called and asked if Karen and I could drop by his studio/academy in Connecticut. He said sure, we did, he ordered pizzas, and I had a couple of the best, most hospitable hours I've ever experienced as a cartoonist. He's a great storyteller, knows everyone in the business (especially the old guard), and couldn't have been nicer or more generous. I blogged about that visit here. Guy has since left New England to pursue his passion for country music, so I was lucky to catch him when I did.

What Guy couldn't possibly have known is that today is my birthday. I didn't intend to mention it, but when a birthday gift like that turns up, well . . . that's pretty darn cool. Sorry, Karen, I don't see how you're gonna top that. Although I'm sure the cake you spent all evening baking will be delicious.

I've already written to thank him personally, but I'll also do it publicly and add that Guy is one of the good guys. Many thanks to him!
.
Posted by Brian Fies at 8:28 AM

Brian, that pic has to go in your "In the Wild" gallery!

Love it! And isn't Guy the greatest?

This is SO COOL!

Guy Gilchrist is a class act. Always. His occasional posts in r.a.c.s are a testament to this, if there wasn't other abundant evidence.

p.s. my word verification for this comment is fiyes, Fies.

What fun! Great birthday present, too!

Aw.You guys!Sheesh!
Brian was telling me about this book when he and his wife came to visit the academy in Ct. As you all know, Brian is not only nice, but brilliant. The book is brilliant. I've used his first book as an example of how to write a graphic novel, when I still do my occasional lecturing and am asked.
I didn't know it was Brian's birthday, but I guess God and Fritzi did. I'm always so happy when I can make someone smile. What a great gift we have. That place in the newspaper, online, on a cd, to make someone smile, and forget their worries for 5 seconds. It makes me always feel good when anyone cares at all about what I do. God bless you, Brian. Happy Birthday. I think you're a terrific guy.
Guy