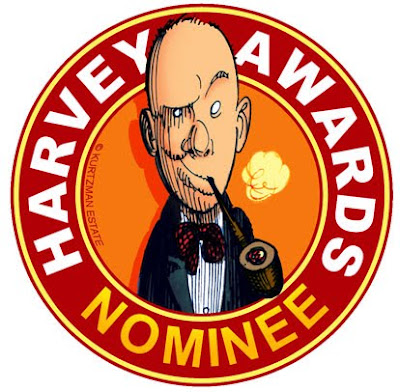 Sad news from last night's Harvey Awards, announced at the Baltimore Comic-Con: my streak of successfully predicting the winners of awards for which I was nominated came to an end. Even sadder, it didn't end because I unexpectedly won.

Best Colorist: Laura Martin, the Rocketeer: The Complete Adventures. Ooh, did not see that coming! I haven't actually seen this collection of the late Dave Stevens's Rocketeer series, but if the coloring was as gorgeous as the art--and better yet, complemented the art without overpowering it--the honor was well deserved. 4-1.

Counting my two correct Eisner forecasts, my 2010 prognostication record is 6-1, or 86%, while my award win-loss record is 0-7. Clearly I'm in the wrong business.

Editor Charlie texted me the news at the ceremony's end. While he sat in a Baltimore ballroom itching for a chance to leap to the stage and accept a trophy on my behalf, I was attending a members' reception at the Schulz Museum to celebrate the opening of a new show, "Peanuts . . . Naturally." Sitting in the sun on the museum's back patio talking to nice people and listening to a bluegrass ensemble while sipping wine and nibbling fruit skewers, artisan cheeses, and vegan appetizers (befitting the exhibition's ecological theme), Karen and I agreed we'd made the right choice. Still, I'm sincerely grateful for my five (!) Harvey nominations and the support of everyone who voted for me. Congratulations to the winners.

Oh, and the four-word acceptance speech I asked Editor Charlie to give on my behalf if I won? "I demand a recount."
.
Posted by Brian Fies at 7:56 AM

That acceptance speech would have been brilliant.

I'll have to agree that wine + snacks on a patio with members of the Schulz museum sounds more fun than any ballroom.
And, like Miguel said, that's a clever acceptance speech. I'm sure you'll get a chance to use it in the future.

Great acceptance speech. Here's *my* prediction: you'll get to use it yet.