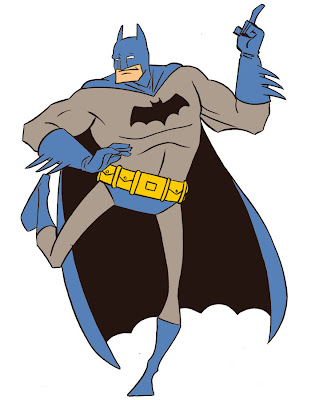 Cartoonist Jesse Lonergan (whom I don't know and, honestly, hadn't heard of before today and I'm sorry about that) has drawn a batch of Star Wars and superhero characters in silly dance poses. Comics Reporter Tom Spurgeon, whose link sent me there, dismissed it as "that kind of cute superhero thing (that) really does it for some people, and doesn't do a thing for others," and it certainly is that, but I got a little more out of it.

First, they're neat examples of cartooning in their own right. Each figure shows maximum expression with minimal details. Their anatomy is very stylized but solid. They reminded me of "gesture drawings" in art classes, in which you have only a few seconds to capture the essence of a figure in motion. Some of Lonergan's characters are little more than sillhouettes, yet they're full of life and movement. Even attitude and emotion! That's hard to do.

The second thing I noticed is that a full page of these figures has a sort of cumulative effect of suggesting movement that approaches animation. That's especially apparent in this bunch of Spider-Men: 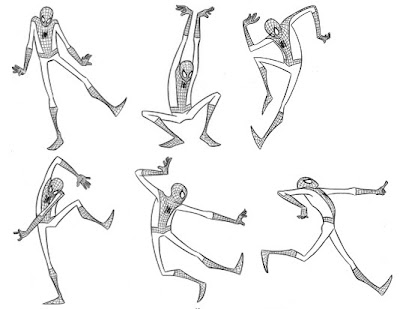 Cartoonist Jules Feiffer mastered that effect with his dancers pirouetting existentially through life, and I was also reminded of one of the most enduring sequences from Bill Watterson's "Calvin and Hobbes": 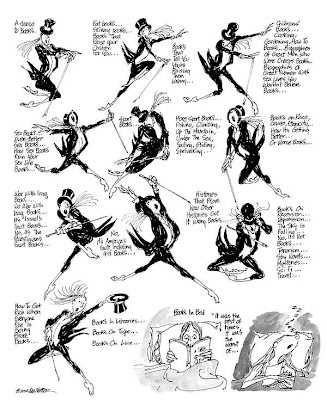 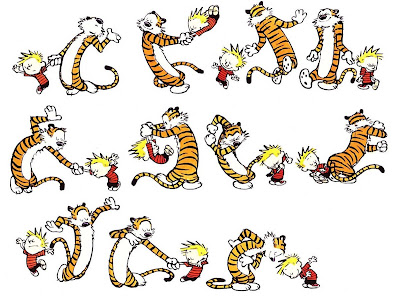 It's interesting that all three examples lack the traditional comic panel borders, encouraging the eye to flow uninterrupted from one image to the next. I think that's important.

Even if Lonergan's dance drawings are too cute for your taste, there's some cartooning wisdom to be had there.
.
Posted by Brian Fies at 8:44 AM

A number of years ago, someone at, I think, United Media (may they rest in peace) decided that asking cartoonists to draw their characters dancing would be a great way to create icons for strips. But, of course, other syndicates didn't do this, and the mood apparently passed at United as well. The result was that, if you were doing publicity around the strips in your paper (as I was at one time), you wound up with a mix of regular icons and icons of dancing characters.

Actually, what you ended up with was icons you had made yourself on Photoshop, which the syndicate probably didn't want you to do but which was better than having readers think that about a third of your comics were about dancing and the rest were not.

That's funny. Sounds like a true corporate decision. I can imagine cartoonists sitting at their boards shrugging and saying "well, all right, if that's what they want..."