In Which I Indulge Myself

Long, LONG-time readers of my blog(s) may recall occasional mentions of my modest collection of original comic art. With the exception of two small pencil drawings by Charles Schulz I've had since I was a kid, I didn't start collecting cartoons until I got my first check from Mom's Cancer and bought the crown jewel of my collection: a "cel" from Winsor McCay's "Gertie the Dinosaur," a pioneering animated cartoon made in 1914. 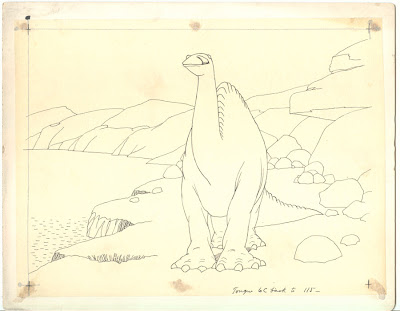 Nice way to start a collection.

Of course I've always loved original comic art and could have bought it anytime, but I never thought I deserved to have it until I'd made my first buck as an actual cartoonist. Realizing that collecting could quickly get away from me if I let it, I made two rules: I could only acquire pieces done by people I'd gotten to know at least a little bit personally, or pieces by a small roster of greats who especially inspired me. I also accept gifts. My rules keep the collection small and manageable, and ensure that each piece really means something to me.

(Digression: I see collectors at the comic conventions with fat portfolios stuffed full of pages of original art, and I just don't understand that. They never look at it, never display it, and don't seem particularly interested in the art or artists. The pieces might as well be stamps or coins, and maybe to them that's exactly what they're like. I'd rather have one piece from a friend that makes me smile when I look at it than 100 pieces worth 10,000 times as much warehoused out of sight in black plastic binders. But that's just me.)

Yesterday's mail brought my latest find, a daily "Gordo" strip by Gus Arriola. I've written of my admiration of Mr. Arriola's work before. He's on my personal All-Time Top Ten List. If I could ink like any cartoonist in history, I think it would be him (although Walt Kelly would be a contender).

This one's a two-fer: it's Arriola, plus it's space-related. Finding a piece that hits two of my favorite things = too good to pass up. Here's a close-up of the last panel that shows some of what I mean about Mr. Arriola's inking: the "glow" lines that transition from white sky to black, the silhouetted tree and figures, the stylized hatching on the ground: gorgeous. Arriola began his career as an animator and it shows. I wish you could see the original: the blacks are incredibly crisp, with little evidence of under-drawing. This may be the cleanest original art I've ever seen. 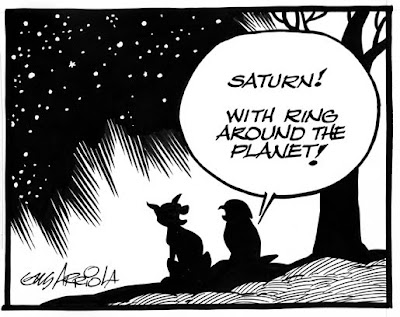 Sadly, Mr. Arriola must fall under my "industry giants" rule rather than my "friends" rule. "Gordo" ran from 1941 to 1985 and Arriola passed away recently, in 2008. I only learned then that he lived relatively nearby. If I'd had my wits about me, I could have written him a letter telling him what his work meant to me, maybe even had a chance to thank him in person. Another missed opportunity to add to my Big Book O' Regrets.

While I'm on the subject, I'll share the second-most-recent addition to my collection, a wonderfully generous gift from my friend Mike Lynch. Mike is a specimen of the nearly extinct genus "people who earn a living from magazine gag cartooning." A long time ago I expressed admiration for this particular cartoon and was thrilled to find it under my tree last Christmas. See? Now that's a story and a friend I get to remember whenever I look at my wall. 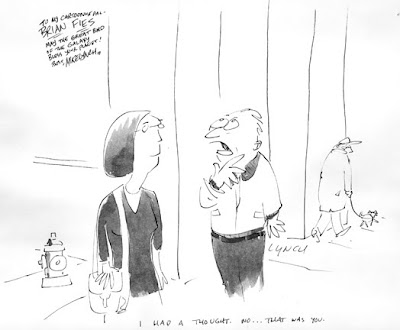 If you're interested in collecting original comic art, it's not a bad or necessarily expensive hobby. As with any art, you have to know what you're looking at, and look at enough of it to know whether the price is fair. Shopping in person is best, but I realize that's seldom practical. eBay is a terrific resource (that's where I found my "Gordo") but beware! Fakes are rampant--it's funny how often Schulz forgers misspell "Schulz." Check out the seller's reputation. Know the difference between an original and the various prints, proofs and photostats that often show up on the market (in animation art, also learn the difference between a production cel (original) and a "sericel" (lithographed copy)). Your best bet may be to buy directly from the cartoonist. Not all sell their originals (I don't) but many do, and will be happy to point you in the right direction.

I have exactly one piece of original comic art in my collection. I've never met the artist, but I'm a big fan of his work, so that probably fits your criteria. I'm also pretty sure it's not a fake, but it was very cheap for this sort of thing. Here it is.

That guy's a hack.

I think he's got a lot of plaques.

Brian, that McKay cel has me gobsmacked. In animation terms, it's like having the Diners' Club receipt for the Last Supper.

How does one get such an item authenticated? I would imagine provenance must be a key part in acquisitions like that.

Also, how would you display such an item? There's a balance between showing it off and protecting it from unnecessary photons.

Jim, I know the feeling. I first saw a Gertie cel at a museum exhibition maybe 10 years ago and truly felt my knees go a bit weak--I'd had no idea any still survived. Turns out there are about 250 or 300 of 'em (out of an original 10,000 or so). I found mine through a reputable dealer in animation art; aside from that, without tooting my own horn too much, I can tell it's real just by looking at it. Any doubts were settled when I watched the "Gertie" cartoon frame-by-frame and found my specific cel (I think it was actually used twice). Display is the usual: acid-free matte, UV-resistant glass, and it's in a dim spot with no direct sunlight.

I definitely feel a sober responsibility to be Gertie's steward: she was around long before me and if I treat her right she'll be around long after. Meanwhile, I get to rent her from history for a while. Think I'll throw her a 100th birthday party in a few years.

A friend of mine in San Diego has a fascinating bit of artwork. She was at a bookstore with her daughter for a book signing by Peter Max.

When she arrived at the table, she introduced her daughter to Mr. Max, and asked him if, instead of an autograph in the book, could he make a quick doodle of her daughter in the inside cover. He said, "I'll do you one better," and did a sketch of her. Don't know if he does that a lot but her daughter is the only person I know who's had her portrait done by Peter Max.

The well-crafted Gordo strip reminded me a bit of Pogo. When I read further and discovered Arriola was an animator, I wasn't surprised.

some day, sir, someone will be waxing poetic about the original Fies they occasionally show off in their collection...

Sligo, I can only surmise you're talking about artwork done by my girls, who do indeed have talent and potential. I've got boxes of it in my garage and plan on it supporting me in my old age.

I have a few prized originals, including one I got on E-bay recently. It is a little sketch and autograph by Gluyas Williams that was, the seller insisted, a doodle by a former comic-book artist I'd never heard of. I corrected him, but he didn't change his listing, so I went ahead and got it for what I considered a good price. I won a "Dykes to Watch Out For" in an in-blog contest held by Alison Bechdel. Most recently I splurged on a longed-for "Cul de Sac" original, which is right now the first thing I'd be grabbing in a house fire!