I've gotten a lot of visitors and some nice notes about my last two posts, thanks for those. I still haven't heard anyone say they attended the Comics & Medicine Conference and hated it and want their money back, so that's something. Just a few follow-ups before thinking about movin' on . . .

Co-organizer Michael Green has posted his photos to a Picassa Web Album that anyone's free to visit. He took some very nice pictures plus some of me. He also uploaded scans of those photo-booth pics I showed us taking in the post before last. I won't reproduce them all here--too small, and we were just being silly anyway--but here's a close-up of I believe the only frame with all five conference co-organizers: 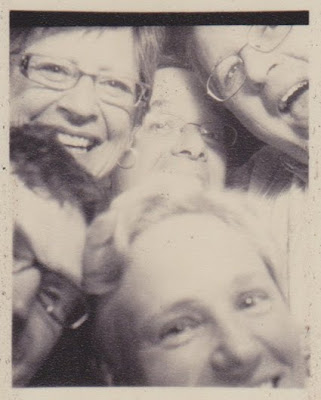 Someone asked for a closer look at the photos I used in my workshop's third exercise on asymmetry (starting at about 10:30 into the "Part 3" video). Here you go. The idea is that you can expand the universe of facial expressions available to you, and create more interesting and subtle expressions, by combining different expressions on the right and left sides of the face. "Happy" on the left plus "Frightened" on the right can add up to express something like "Anticipation." I illustrated the concept by taking a snapshot of my face and then creating mirror images of the left and right sides of my face to make two very different expressions (Warning: it ain't pretty): 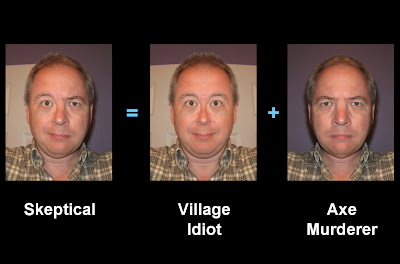 Also, here's a better look at the sheet of paper I used in the second and third exercises, where I asked participants to create new facial expressions just by adding different eyebrows and mouths: 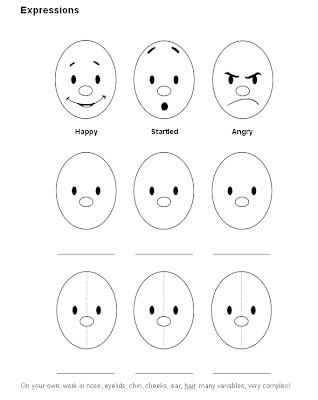 I know Chico Marx's name was pronounced "Chick-o." My problem is that every other "Chico" I've ever known, including the California city and Freddie Prinze, is pronounced "Cheek-o," so that's where my brain goes when it's on the fly. I just want it on the record that I know better.

There was evidently a New York Times reporter poking around the conference. He didn't talk to me, but got hold of some of my co-conspirators. We think it'll be published in the Times' Midwestern regional edition. I'll let you know if it turns up. We've also been talking to a freelance magazine writer who's trying to place an article about Graphic Medicine with a major national publication. We'll see.

I've received a few bits of good news over the past several days, some of which I need to remain coy about. It looks like Team Cul de Sac is planning to include my artwork in their book to benefit Parkinson's disease research, which is fantastic! I haven't revealed my contribution yet because I figure that's their prerogative, but I will as soon as they do.

Over the past several months, I dropped a couple of mentions about contributing to a comics anthology that a friend of mine was trying to find a publisher for. It now looks like he has. I am very excited about this! This is the concept that I thought was so good I was amazed no one had done it yet and I leaped to sign on one sentence into the pitch. Again, it's not my project to announce, but as soon as my friend does I'll tell you all about it.

Finally, it looks like I'll be a guest on a big-time late-night radio program in late July to talk about my work and graphic novels in general. I don't think I need to keep it a secret but I'd be more comfortable waiting until everything's firm before making promises I can't keep. More as we get closer to the date.

Email ThisBlogThis!Share to TwitterShare to FacebookShare to Pinterest
Labels: Getting the Word Out, Graphic Medicine, How I Approach Cartooning

gosh, looks like we're getting to the stage where we'll have to say, "Oh, yeah, I knew him when he was a struggling, um, well, just struggling. He doesn't take our calls anymore."

So much mysterious goodness! Update us when you are able...