One Thing Leads to Another

For reasons I over-explained yesterday, I'm re-running a few of my favorite blog posts (lightly edited) from long ago that I expect were seen by few and forgotten even by them. Like yesterday's post, today's seems to be all about Me. I don't know why. They won't all be. Maybe I'm in a mood.

A six-year update: my girls aren't in high school anymore (whew!) and in fact are both well into earning Masters degrees. As I recall, my talk to their art class went well, though who knows if anything I said stuck. And I believe my conclusion more than ever, enough to consider it one of the fundamental Things I Know Are True. I don't have a lot of those, so you should trust me on this one.

(December 2005) I've been asked to talk to my girls' high school art class next week. Some of these kids are very talented advanced-placement students already preparing portfolios for future academic and professional careers. I've spoken to high school classes before, usually on the topic of "how I lucked into a career combining two things I love best: science and writing." Now that I've got a published graphic novel in hand, I suppose I can extend that list to include "art," yet I have a nagging fear that some of these kids are already way ahead of me.

I was thinking about what I might discuss when my eyes settled on this laminated card pinned to my bulletin board, my first official press pass: 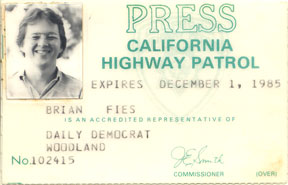 This was where my professional writing career began, fresh out of college at a small daily newspaper in central California. I got the job of part-time night-shift sports writer based on paltry clips of a column I wrote for my college paper plus, I suspect, my ability to type fast--a skill not as common then as it is today. I must have been the only applicant, because anyone else with respiration would've been better qualified. I nevertheless got a foot in the door and covered a season of high school basketball before a full-time (daytime!) position opened on the city beat and I was on my way.

One day the editor bellowed out into the newsroom: did anyone want to fly to Fresno for the weekend to cover the opening of a new power plant? Since no one else spoke up and I was trying to build a reputation as the go-to science guy, I took the assignment. It turned out to be a good story about a hydroelectric turbine complex dug deep inside a mountain between two lakes. The place looked like the subterranean lair of a James Bond villain. I had fun, wrote the feature, and forgot about it. 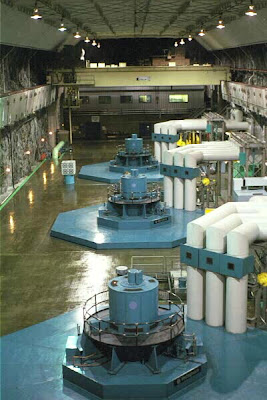 Helms Pumped Storage Hydro Plant,
deep underground. I was there once.

Twelve or thirteen years later, after a decade away from journalism, I applied for a position with a small science-writing firm whose clients were mostly in the energy industry. I passed a writing test and showed up for the interview with one relevant clip: the power plant story. I got the job. And thanks to that job, just a couple of years later I was ready to break out on my own and build a self-employed career I've enjoyed ever since.

I derive three lessons from that story for the young'uns. First, take on tasks nobody else wants because someday, somehow, in a way you can't imagine, one of them will pay off.

Second, one thing leads to another in unpredictable ways. Lives have threads and patterns that only reveal themselves in retrospect. In my case, a column in a college newspaper led to part-time sports writing, which led to full-time reporting, which led to freelance magazine writing, which led to something that actually looks like a career in both writing and comics. Pay attention. Be ready for unexpected opportunities.

Third, if you want to be a writer, write. Anything. I learned the most about writing by covering a season of high school basketball. Two or three games are easy; by the tenth or twentieth you're working mightily to keep it interesting for both your readers and yourself. Because, let's face it, every high school ballgame (or city council meeting or planning commission hearing) is pretty much like any other. I figured my job was to pay attention and figure out what made this game, meeting or hearing special, and then explain that. Even if I didn't care about an assignment, it was important to somebody and I had to understand and communicate why. That made me a pro. (My personal definition of "professional" is "doing a good job even when you don't feel like it." Or, as Charles Schulz said, "writer's block is for amateurs.") The same applies to art and comics as well. Just do it.

By the way, in my three years as a reporter and more than ten years as a freelance writer/journalist/editor, I've never once had to show a press pass to anyone. Too bad.
.

And of course, there's Mark Twain's advice to an aspiring writer: "Write without pay until somebody offers pay. If nobody offers within three years, the candidate may look upon this circumstance with the most implicit confidence as the sign that sawing wood is what he was intended for."

Brian, I love your leson that "one thing leads to another in unpredictable ways." I was a botany major in college. In grad school, I switched to natural resources and worked with satelite images and mapping. My first job was drawing maps for in-car navigation systems using a CAD program. My second (and hopefully last) job is using a CAD program to draw transistors and wires while designing a microprocessor. What does that have to do with botany? I have no idea.