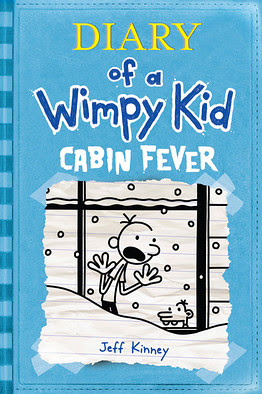 Not that he needs my promotional help, but my pal Jeff Kinney is about to set off on another book tour to mark the release of his sixth "Diary of a Wimpy Kid" book, Cabin Fever. The tour gets underway when the book drops on November 15 with stops in New Jersey, Washington DC, Virginia, North Carolina, Georgia and Florida (the full schedule is here). Befitting this book's theme of being snowed in, I hear that Jeff is bringing along an industrial-strength snow machine to create an instant blizzard wherever he stops. Sounds like fun!

Although Jeff is a friend, I probably wouldn't have mentioned this tour if I didn't have something to say about it (this blog is all about "value added"). First, I understand that the new book will have a first printing of six million copies.

That's the largest first printing for any book being released in 2011. The first printing of the original Wimpy Kid book was 13,000, and even that is a pretty healthy number in my literary backwater. Six million isn't a number; it's an abstract mathematical construct. If you had a dollar for every book, you could build your own cyborg out of Lee Majors.

In addition, our mutual editor Charlie Kochman is accompanying the tour for the first time. I probably wouldn't have mentioned that either, except I'm hoping someone will read this, go to one of Jeff's signings, recognize Charlie, say "Hi, Editor Charlie!" and totally blow his mind. Should you accept the assignment, this is your target: 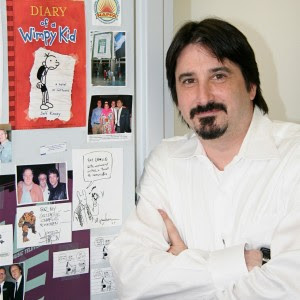 If you want to attend one of these signings/hypothermiafests, I'd advise you to check with the hosting bookstore to see what sort of procedure or ticket is required and arrive very early. Thousands of squealing kids will turn out for these things. A couple of years ago I visited Jeff at one of his appearances in my part of the country, and it was pretty surreal--as I wrote at the time, probably as close as I will ever get to being a roadie for The Beatles. Luckily, Jeff is talented and nice enough that he deserves it. I know how hard he works on these books and look forward to reading his latest.
.
Posted by Brian Fies at 8:09 AM

staggering to comprehend, and kudos to an author who can continue to hold on to normal (at least, that's the way he seems...) whilst the rest of us are gobsmacked by the very notion.

Sligo Mike, I joked about being a roadie for The Beatles, but seeing your comment reminds me that you actually were a roadie for Michael Jackson and Springsteen. That's gotta be pretty close! And, sadly, much closer than you or I are likely to get in our literary careers. Or maybe not so sadly....

yeah...some tidbits (I offer more when I've been drinking):

- being road manager for MJJ in Japan and Australia swung between a 24 hr. work day and being just dang surreal. some day I'll tell you about shutting down Disneyworld Tokyo for his private party

- Springsteen: one of the true nice guys, went out of his way to walk over to my video camera platform just to say "Hi, thanks for workin'".

should be a game show, donncha think? "This week on Here's a Bazillion Dollars, don't forget to call in and cast your vote for which contestant's psyche will implode!"