The Gift of Touching History

Tomorrow's my birthday, as Karen reminded me as she woke me this morning. "Do I get to sleep in?" I moaned. "Actually, no," she replied. Something was up.

Out of bed, showered, quick stop at Starbucks (which faked me out), then south toward San Francisco. I'm no dummy (no, really!) and figured it had something to do with our girls, Robin and Laura, who live in The City. But Karen faked me out again, veering off toward the Richmond-San Rafael Bridge that crosses the North Bay toward Berkeley, Oakland . . . and Alameda.

Which is where they berth the USS Hornet aircraft carrier--once a warship and recovery vessel for the Apollo 11 and 12 space missions, now a floating museum and historic landmark--and where my girls were waiting for me. Surprise!

I've written about my girls and the Hornet before: they both volunteer there, giving tours and chaperoning groups of Boy Scouts and such who spend the night aboard ship. Laura trained up to become a full docent and more recently parlayed her in-progress graduate education in Museum Studies to become the Hornet's full-fledged Archival and Collections Manager. Her job is to go through decades of papers and material that came with the ship when it was decommissioned in 1970 plus a lot more donated by old sailors since, figure out what it is, document it, preserve it, and do the gruntwork needed to make the Hornet's junk into a real museum-quality collection. It'll take months. Years. You know that warehouse at the end of "Raiders of the Lost Ark?" Like that. But what an opportunity for her! So my birthday gift was a backstage tour.

Now I need to tell you about deadly Moon Germs.

But nobody knew that for certain in 1969, and on the off chance that the first men to land on the Moon brought back some alien face-hugging brain-burrowers, the returning astronauts of Apollos 11, 12 and 14 were locked in a modified Airstream trailer dubbed a Mobile Quarantine Facility (MQF) (it wasn't necessary for Apollo 13 since those astronauts never left their ship; by Apollo 15, NASA concluded the Moon was sterile and the MQF wasn't necessary at all). The MQF used for Apollo 11 is in the Smithsonian. The one used for Apollo 12 is at the U.S. Space and Rocket Center in Huntsville, Alabama. The one used for Apollo 14 is on the Hornet.

So here's a photo of President Richard Nixon on the hangar deck of the Hornet looking through the window of an Airstream trailer--excuse me, MQF--congratulating Apollo 11 astronauts Armstrong, Collins and Aldrin. Note the "Hornet + 3" sign above the window, covering up the "Airstream" logo with a touch of military whimsy (similar whimsy had the astronauts fill out a U.S. Customs form listing their previous destination as "Moon" and declaring their cargo of "Moon rocks"): 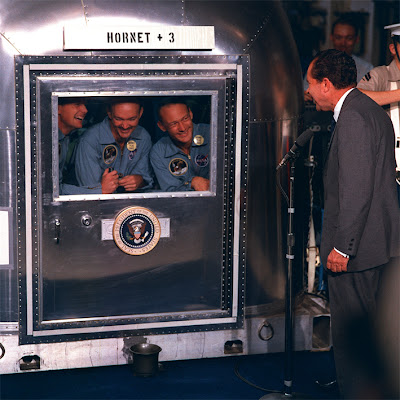 Now look at me this morning, grinning like a loon, holding a piece of painted wood Laura found tucked away on a shelf one day.


Now look at the shelf behind me, under my left hand (here, I'll blow it up for you!), and compare it to a photo of the MQF used for the next lunar landing, Apollo 12: 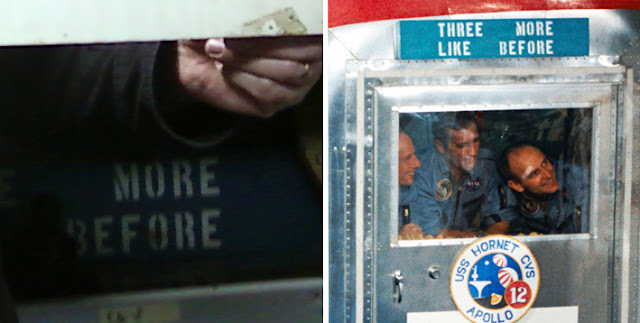 Some of you may say, "So what?" I understand your reaction. Others of you might get chills up your spine and tears in your eyes. You understand my reaction.

Best. Birthday. EVER. And best kids ever.

"Others of you might get chills up your spine and tears in your eyes."

Add one to that column, please.

Brian, as I'm reading your post, I'm sitting only a few miles from where +3 and Three More began their journeys at the Kennedy Space Center. Friday, my kids flew in from both sides of the country to celebrate my birthday and wave goodbye to Shuttle Discovery as it began its final flight to a museum hangar in Virginia.

It's great to have families who understand how pieces of futures past can affect us so deeply, isn't it?

Wow! What a great present! What great kids! Happy Birthday, my friend. You are living the life!

Birthday greetings from Cape Canaveral. I know that my envy feeds your aging soul, but as I stood in the Vehicle Assembly Building next to the Shuttles on my own birthday last Friday, I guess we're even, Mister Bond.

Terrific present! Greg was on that ship when he was stationed in Hawaii-they picked up one of the test Apollo capsules - seems like only yesterday!
Have a great birthday!

Thanks, my friends. It was a great day.

Jim, thanks again for the photos of WHTTWOT proudly posed around the KSC, they've been gratefully added to my "In The Wild" album. Also, it looks like you tried to leave a previous comment here that showed up in my e-mail but not on the blog itself. I don't know why; just wanted you to know I didn't deliberately delete it.

Mary, I did not know that about Greg. Would love to hear his stories sometime. Laura is trying to gear up an oral history program to record the memories of people who served on the Hornet and ships like it; maybe she'll turn up on your doorstep with a recorder someday.

Hey Brian! Great story and picture. It is the real deal because my dad made both 11 and 12 signs while aboard the Hornet. The one incorrect part of the story is that the signs were not left with the ship. My dad has been in possession of those for many years. I had those hanging on my bedroom wall growing up! We visited the Hornet in June of 2011 and put the sign and many other items on loan to the museum. I hope by now they have them displayed and not on a shelf. If Laura is doing the voice recordings still I'm sure my dad would like to share his stories!
Thanks for the story!

BJL, How great to meet you, and cool of you to write. I wrote this post based on my own assumptions. Laura later set me straight about how the signs had been taken home by a crewman and donated to the ship--I never corrected this post (although YOU just did!) but the Hornet staff knew the right story all along.

The signs now have a great display case in the Apollo exhibition area. They're the Crown Jewels of the collection, and are being shown great care and respect.

I'll make sure Laura sees this post. If you'd care to send me an email contact at brianfies[AT]gmail[DOT]com, I can connect you. Whether orally or written, I'm sure they'd love to hear your family's story.

Thanks again! You made my day.