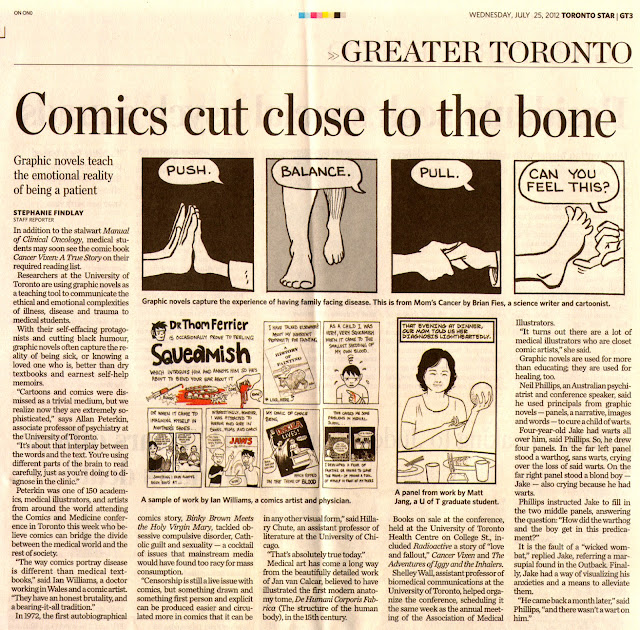 Last Wednesday, when our Comics & Medicine traveling roadshow was done but still in town, the Toronto Star newspaper printed a nice half-page article about it. I met reporter Stephanie Findlay but wasn't interviewed for the piece or mentioned in it. However, she used four big panels from Mom's Cancer to illustrate it and gave me credit in the cutline, so my ego was served.

Honestly, the article itself, which is available online, is just all right. Ms. Findlay opened by quoting an explanation/definition of graphic medicine by one of our attendees, which is fine as far as it goes but might've been better coming from one of the people who actually organized the event. She also devoted five full paragraphs at the end to retelling an anecdote from Neil Phillips, a psychiatrist and lovely man who trekked from Australia for both the Chicago and Toronto conferences, that makes it sound as if comics can cure warts. On the list of the many social, literary and healthcare contributions I think graphic medicine has to offer, I'd place wart-curing way down toward the bottom. We joked that if Neil isn't careful, he'll build a worldwide reputation as The Wart Whisperer.

That's fine. As a former and still-occasional journalist, I've met very few article subjects who believe the reporter got it exactly right. While it's not the story I would've written, it's still good press and I appreciate it. Especially those four big panels at the top.
Posted by Brian Fies at 9:11 AM

Great. Now what about the dog?