Riley is working her way into our household routine. Having a new baby in the house has its joys and frustrations, but no regrets. She's a sweetheart. Puppy-proofing both yard and house is a continuous process, generally guided by Riley ("Hey, this plant tastes good! Hey, is that black gooey thing on the garage floor something I can eat? Hey, I can pee on that!") 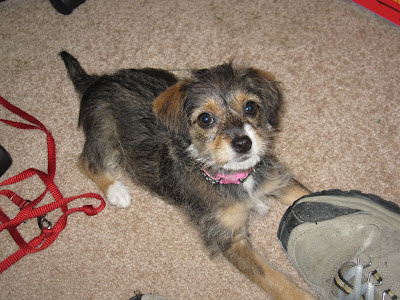 I'm getting ready to go to Toronto next week for the Third International Comics & Medicine Conference, the second such I've helped organize. The organizing committee had our final conference call yesterday and convinced ourselves that any remaining problems will be small ones. I'll be moderating a few panels and giving a 90-minute workshop I've titled "Comics Fundamentals: Mastery of Time and Space" because I think too small. I very much like the idea of taking some time at an academic conference dedicated to analyzing, dissecting and bloviating about comics to actually write and draw some. If you attended my workshop at last year's conference in Chicago, this one will be about half new and twice as good. I hope. We'll see. What's the worst that can happen?

Great. Now I'll spend the next five days visualizing the worst that can happen.

I've never been to Toronto, hear it's a great city and am looking forward to making its acquaintance. Any suggestions for "Don't miss" activities/attractions are very welcome.

Allow me to point you to this piece on the blog of master comic book letterer Todd Klein (whom I've met!) about the Golden Age letterer and designer Ira Schnapp. Or, more precisely, stories that artist Neal Adams told Todd Klein about Ira Schnapp.

Never heard of any of those guys? Hardly matters; it's still a neat human-interest story about a type of professional pursuing the type of career that I just don't think exists anymore. The many ways Mr. Schnapp and his contemporaries found to practice the art and science of typography astonished me. Everything from logos atop comic-book letters columns to chiseled marble panels atop Grand Central Station. Worth a minute of your day, I think.

After pencilling 110-plus pages of "Mystery Project X," I'm seriously thinking about scrapping all that and starting over from scratch with an entirely new plot and graphic style. Same protagonist and premise, but a totally different approach that came to me in the past week and I really love. I need to let it simmer and maybe do some sketches before I pull the trigger (The Wingwalker's Credo: "Don't let go of what you've got until you've got hold of something better"), but I'm not afraid to. What I have in mind will be much more fun for me to draw and for you to read. It's all part of the process of creative destruction. The good news: I can turn over those 110-plus pages and draw new pages on their backs, saving me a ton of money on paper. Win-win!

"On To Toronto" isn't a palindrome but it should be.

If I don't post again before I go, I promise plenty of stories and pictures when I return.

Don't fret about re-imagining Project X. My Master's thesis started out as a ponderous examination of why there's a Gemini door on the side of Skylab, and then it turned into this mess of a book I'm trapped in.

Could you provide a daily graph of how many Riley pictures you've taken? Also - why has he not been sketched yet?

Oh my gosh, you'll LOVE Toronto. I'll be in touch by email with some suggestions.