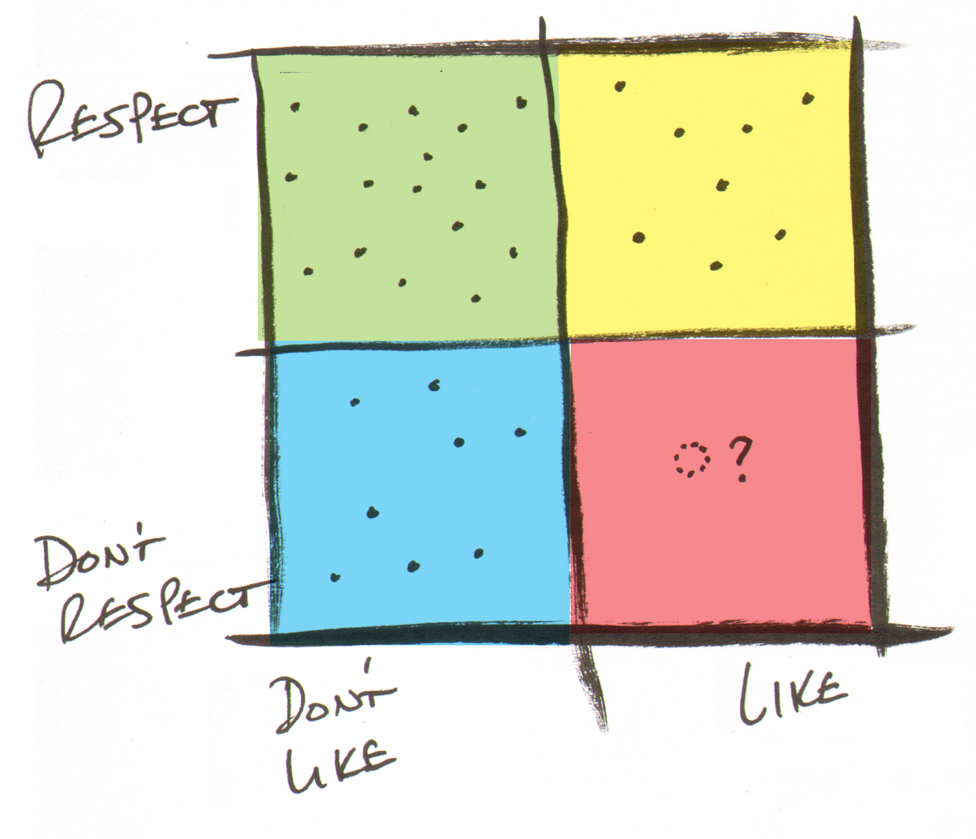 I've realized that my attitude toward comics is captured in the above matrix.

At the upper right (yellow) are comics that I both like and respect. Their subject matter, approach, humor (if appropriate), and other content appeal to my taste and interests, and I think they're done with professionalism. I figure they represent about one-quarter of the comics I see. A fair portion of cartoonists I know (bearing in mind that I don't know that many) do work that falls into this category.

At upper left (green) are comics I don't like but still respect. They're not for me but I can understand why they're for somebody. They're skillfully done, I can appreciate the artistry and craft that went into them, but for some reason they just don't spin my beanie. An obvious example is children's comics: I can look at one, think "that's an excellent children's comic," and have no desire to read it myself. Also many Underground comix. I figure these represent about half the comics I see. I'd also say that a fair portion of cartoonists I know do this type of work--maybe equal to the number in the first group.

At lower left (blue) are comics I don't like and don't respect. Somebody's making, publishing and buying them, but I don't know why. I consider them incompetently executed and fundamentally unappealing to anyone. I literally don't understand how their creators have careers. In many ways these are the most puzzling and frustrating to me, especially when they succeed wildly. Sometimes I wonder if I'm wrong. Or insane. This is another quarter of the comics I see. I know a few cartoonists whose work I'd place here--not many, but sometimes they're just so darned nice I have to overlook their perceived creative faults.

At lower right (red) would be comics I like but don't respect. I couldn't conjure a single example; the dashed dot and question mark represent a theoretical possibility that such a chimera could exist. You might think a "like but don't respect" comic would be a trashy guilty pleasure, but the fact that it gives me pleasure also makes me respect it--it's doing something right--which lifts it up into the yellow.

Boiling it down, I like and respect about a quarter of the work I see. That's about right. I'm a grumpy comics consumer who, it turns out, doesn't really enjoy a lot of comics.  I respect about three-quarters of them, but the number I'd actually want to sit down and read is pretty small. The rest I find inexplicable.

I think I'm more lenient with other arts. I can watch a movie or TV show, read a book, watch a play, listen to an orchestra, eat a meal, and find something to like in almost anything. I'm pretty easy-going. Maybe I'm tougher on comics because that's where my own ambitions lie. The people making them aren't just there to entertain me--they're my colleagues and competitors. My standards are higher. Their tricks don't fool me.

By the way, I know this works both ways. Over the years I've sold or given copies of my books to various cartooning acquaintances, and I would bet a million bucks that fewer than one-quarter of them get read. That's all right. I probably didn't read theirs, either. We can still be pals.

Brian, you're like the Gregor Mendel of accounting for taste.