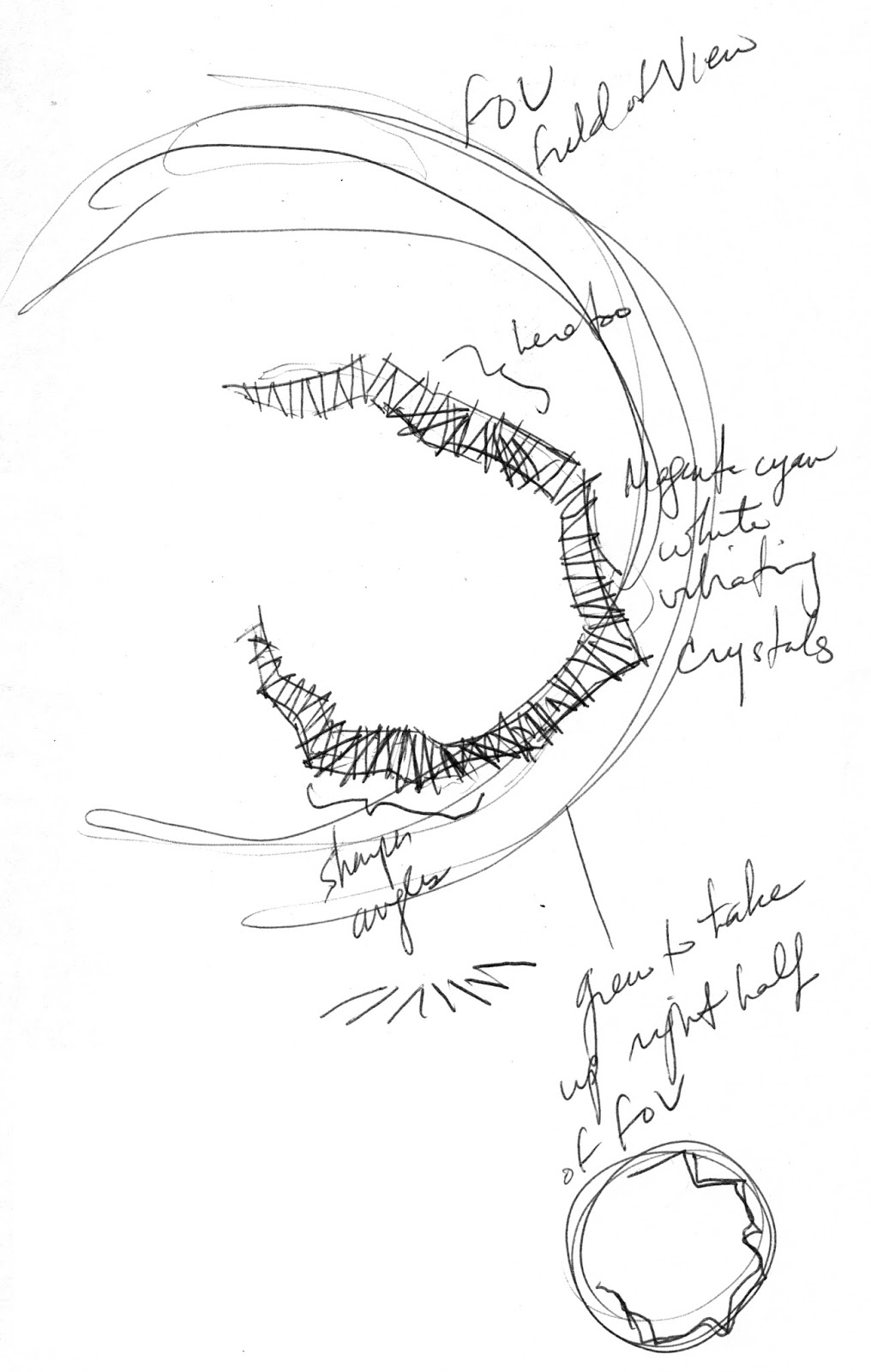 I've read a couple of articles and a couple of novels about this idea that many of history's mystics were migraine sufferers. It sure does seem like it's a particular part (or parts) of the brain that is misfiring.

It's so good to see this documented. I have had 2 visual disturbances in the past, but they weren't like this one. A few minutes ago one like this started. The others were not spiraled, but this one started out so small and just kept growing. I rushed home and had to see if anyone else had experienced this. Thanks for posting, I was sure I was stroking out.

I had a visual migraine today and never feel like I can fully explain it. I always use the flag banners from a used car lot refracted and prismed to define them. This is IT! Mine are much brighter. Primary colors and still refracted light, but this is it. Thank you for putting it into a picture. BTW, my husband said I did a wonderful job of describing it when I showed this to him.

Unknown, I'm very glad I could help visualize this for you. It's hard to describe! I like your flag banner analogy. Thanks for commenting.

I got my second one of these today and found your site while researching it. Sounds mostly harmless. Mine was much like the subtle one in which I didn't see distinct lines or colors that weren't there, but there seemed to be a vibrating semi circle in my field of vision. I couldn't read or write during it, it affected my vision too much. However mine (both times this has happened) was more strongly on my left side.

I too find it fascinating that this happens to so many people.

Do you have any tips for how to help relieve the symptoms? All I could do was sit and close my eyes . I had no headache at all with it.

8littlepaws, I'm not a doctor, so it's best to ask one. But I've had some success, when I first feel a migraine coming on, of taking a double dose of an NSAID like Advil. It seems to shorten the attacks and make them easier to get through. Otherwise, not really...sitting quietly with eyes closed (and accepting that I'm just not going to get anything done for the next while) is sometimes the best I can do, too. Best of luck!

I'm glad the visual part of mine has gone away, otherwise the captcha would have been Impossible, not just difficult per usual.

My description is like that expanding sphere toy, but made of crystals (and only half)...I found this neat video of "the original sphere." http://www.youtube.com/watch?v=xRL0tMaNgjQ

Thank you for putting this page together!
-Jane
seejaneblog@yahoo.com

Jane, your description of an aura as an expanding sphere toy is perfect. I have one of those, and will use that metaphor in the future! I'm glad you found something useful here.

I too am fascinated by the phenomenon. Mine begins as a small light like the afterimage of a reflection of the sun off of a shiny surface. Then it grows to the familiar crescent shape. It continues to grow as the details become more defined as colored flashing zigzags. It eventually monopolizes my field of vision then slowly shrinks till it slides out of range and my vision returns to normal. The whole thing lasts almost exactly 20 minutes.

The images I have seen that represent others' experiences are eerily similar to mine. I wonder if there are historical descriptions recorded anywhere and if so, how the episodes were explained.

My final comment here (I read a lot of science fiction): what if we are all connected in some way that goes beyond just a sharing of symptoms, and that connection manifests itself as the crazy light show we all experience.

Thanks, Anon. I like the way you think. I'm not a migraine scholar, but I think the visual aura were described in ancient Greece. No doubt spirits and demons were common and convenient scapegoats.