A Matter of Perspective


I see a lot of artists complain that drawing in perspective is hard. I don't understand that. It's one of the first things they teach in middle school art class, and mastering it should be as fundamental to any artist as using a hammer is to a carpenter. Whenever a drawing isn't "working" for me, it's often because I haven't thought through its perspective; once I do that, the composition fixes itself.

Granting that different brains work in different ways, if you can draw a straight "horizon line" across the page and set up one, two or three "vanishing points," depending on the effect you want, the rest is drawing simple straight lines. There are a lot of lessons online and elsewhere about how to do that, and this isn't one of them.

Instead, this is a tip to share something I did today that, it occurred to me, might not be common knowledge.

The standard technique for drawing perspective is to establish a horizon line and vanishing point: 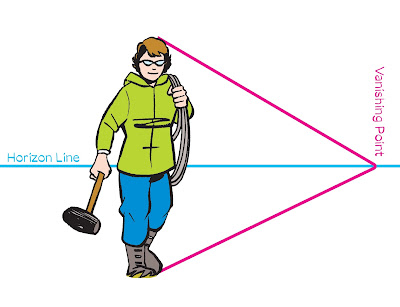 The horizon line is literally that: the line that divides earth from sky. Then, assuming other figures are the same height as the first, fitting them within those perspective lines will make them all look the same size. 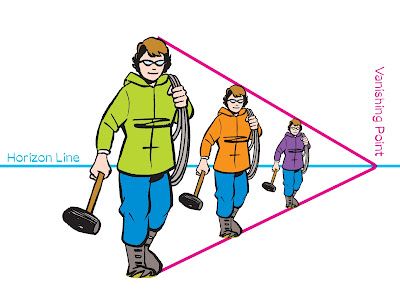 The same technique works for telephone poles, railroad ties, whatever you've got. But this morning I did something I often do but haven't seen written up in the usual tutorials. I do it backwards.

Let's say that, for whatever reason--maybe there's a caption box in the way, maybe you just like the composition--you want to arrange the figures in some arbitrary way: 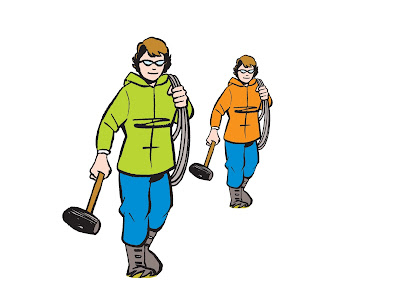 To complete the drawing so that those figures make sense--to make it clear that neither is a giant or a dwarf--I want to find the horizon line. No problem. The key is this: assuming your figures are the same height, the horizon line hits at whatever parts of their bodies are level with each other.

For the drawing above, their shoulders are at the same level, so that's where I put the horizon line. 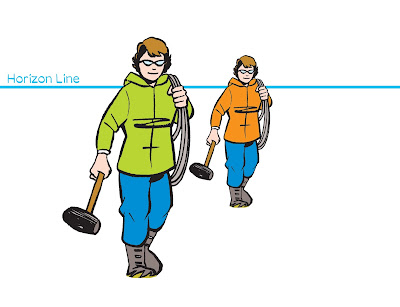 Find a vanishing point by drawing a line from the tops of their heads through the horizon line, and carry on from there. In particular, other figures that are the same height will fit within the same perspective lines, and all their shoulders will hit the horizon line, too! 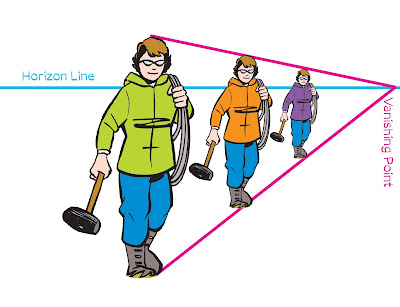 This may not seem very useful. How often would you want to draw a column of people lined up like telephone poles? Ah! Once you've figured out how large the figures look at different distances, then all figures at that distance (again, assuming they're supposed to be the same height) will be that size. Here I've drawn orange lines marking the height of the orange-coated figure, and purple lines marking the height of the purple-coated figure. 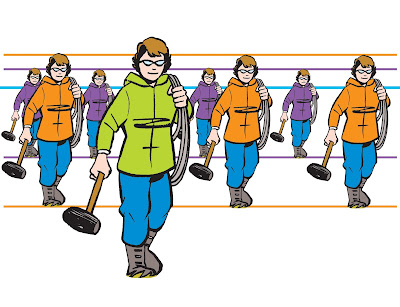 Once you know your horizon line and vanishing point(s), you can put your people anywhere, then create a world of railroad ties, telephone poles, buildings, trees, roads, earth and sky for them to live in. (And look at how all their shoulders line up with the horizon!) 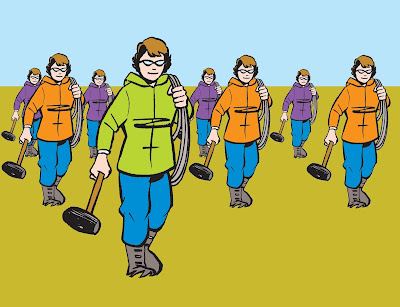 Tuck that away, maybe my back-asswards perspective cheat will be useful someday.
Posted by Brian Fies at 10:40 AM