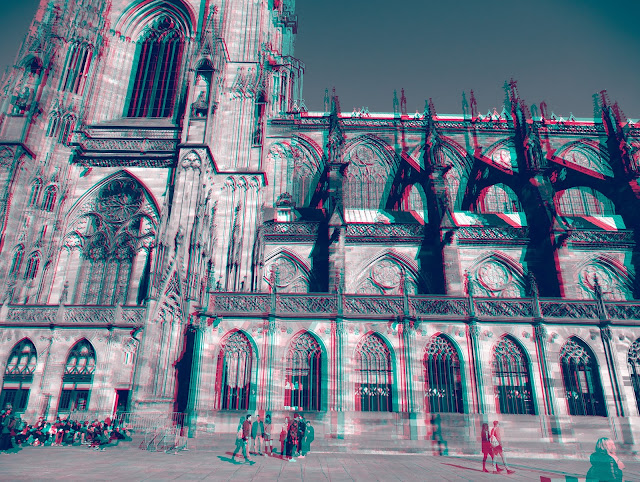 A couple of posts ago, I concluded my Rhine River Cruise trip report with a three-dimensional photo of the Strasbourg Cathedral (above). I shot more photo sequences on that trip intending to make 3D pics ("anaglyphs") out of them, and put a few together this morning. You'll need old-school red-blue 3-D glasses to see them.

In theory, making 3D pics like this is easy. You need two views of the same scene taken from slightly different vantage points, in the same way your eyes provide depth perception by seeing the world from two slightly different angles a few inches apart. So what I do is snap a photo, take one step to the right or left, and snap the exact same view. To cover my bases, I sometimes took four or five shots in a row like that: shoot, scootch, shoot, scootch, etc.

You can do the same thing if you're in a vehicle moving horizontally past a scene--for instance, on a boat on a river! Take a shot, wait a second for the boat to move, take another shot: two views of the same scene from slightly different vantage points. (That's how NASA produces 3D photos of asteroids, comets, moons, and a lot of other space objects: take the first shot, fly by for a few more seconds or minutes, and take the second shot.)

In practice, I've found there's a lot of art involved in getting the angles, colors, and alignment just right to get a good 3D effect. Some of these work better than others.

There are many other approaches to making 3D pics. You can make stereoscopic images, like the old Viewmaters slides, which let you use full color. In theory, you could also make full-color red-blue anaglyphs by deleting all the non-red out of one picture, all the non-blue out of the other picture, and overlapping them like I do here. I haven't had much success with that unless the original colors are balanced just right, which most of the real world isn't.

Email ThisBlogThis!Share to TwitterShare to FacebookShare to Pinterest
Labels: Anaglyphs