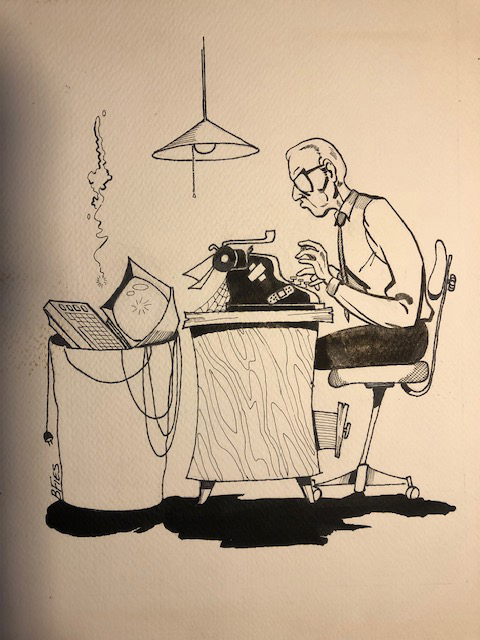 I just got the best email! Completely out of the blue, somebody sent me a photo of a drawing they'd found among a deceased relative's effects and asked if I'd done it. Yes I did. I was about 23.

Sometimes artists publish examples of their "juvenilia"--work done when they were very young. I will never do that, because I didn't have many examples of my early art even before 2017, when I lost it all. This is about as close as I will get to seeing something drawn by Young Brian.

As I said in my reply (below), I'm both embarrassed by and proud of it.

I replied to my correspondent:

"Oh my gosh. That is an unexpected flashback that made my day. Yes, it's mine.

Working off of old memories that may not be 100% accurate....

From about 1983 to 1986, I was a reporter at the Woodland (Calif.) Daily Democrat. It was my first job out of college, and I think I only got a part-time position there because I was the fastest typist who applied, since I had almost no other qualifications. I started in sports, then went to Davis where I worked city beat, then to Woodland where I also did city beat.

Along the way, my colleagues on the DD discovered that I could draw, and I did a lot of graphics and illustrations for the paper. After I'd been there a short time--maybe while I was still doing part-time sports, around 1983-1984--the DD put out a special edition to commemorate . . . something. I don't remember exactly what--it wasn't sent to subscribers, it was a run of the paper done just for the paper's owners and staff. There may have been a banquet to which I wasn't invited. My illustration celebrated the career of (Googling quickly) Charles Paynton, your relative I presume, who at that point had been at the DD for decades and did a column titled "Backtrailing" (again, Google tells me this, I didn't remember it). Maybe the event was his retirement from the paper.

The gag of the cartoon is that Mr. Paynton was an old-fashioned fellow who didn't cotton to all the new-fangled technology that was then invading newspaper production. He'd have been happy clacking away on his ancient typewriter forever.

Attached is the only photo I have of me from around that time and sitting in the newsroom of the Woodland Daily Democrat, where you'll see the type of computer terminal I tossed into Mr. Paynton's trash can.

Thanks for the memories and a look back at an early cartoon that I'm both embarrassed by and proud of." 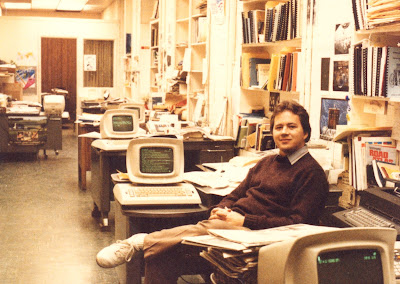