Last night the Moon glided between Earth and Mars, an event called an "occultation." Lunar occultations of planets are kind of rare but not really significant, except as a reminder of what my astronomer friend Sherwood called the "beautiful, graceful minuet they've been practicing for billions of years." I have thoughts.

My neighbor Mari took these photos before and after the occultation, with a regular camera. Mars is the speck at lower left (left) and upper right (right).

I was trying to explain the Moon's motion to Mari's husband Ron, and said something like, "The Moon actually moves from right to left (west to east), and it's going to pass Mars pretty fast." It occurred to me later how confusing that is, because the Moon obviously rises in the east and sets in the west (left to right in the Northern Hemisphere), just like the Sun and stars, so how can it also move from west to east?

It does both at the same time.

Because Earth spins once a day, everything rises in the east and sets in the west. But on a slower time scale, from day to day or week to week, the Moon and outer planets meander in the opposite direction, from west to east (the word "planet" means "wanderer")*.

The Moon's motion is actually incredibly complex. Since its orbit isn't a perfect circle, from our point of view the Moon gets slightly larger and smaller, and moves slightly faster and slower, over time. Its orbit is also tilted with respect to Earth, so from month to month it bobs north or south, similar to how the Sun moves higher or lower from season to season.

All these different motions--wheels within wheels within wheels--repeat in a 19-year rhythm called the Metonic cycle (or the slightly more accurate 76-year Callippic cycle). Whatever spot and phase the Moon is in today, it'll be in that exact same spot and phase 19 years from today. Ancient astronomers knew all about it. The Babylonians, Hebrews, Celts, and perhaps Polynesians all built calendars around it.

Here I'm approaching something like my point: marvel at how smart they were! Ancient astronomers didn't have Newtonian physics or what we'd call modern scientific discipline, but they were careful and brilliant observers. A civilization that can watch, track, document, and mathematically express the motions of lights in the sky over decades is working at a very high level. It was somebody's job to do that, and probably one they passed down to generations of apprentices because some celestial cycles last longer than one astronomer's lifetime.

Never underestimate the intelligence of ancient peoples. They had the same physical brains, the same cleverness and insight and genius, that we do. They had their Newtons and Einsteins. Could you observe the Moon every day for 19 years and discover the Metonic cycle? I couldn't. But people did, thousands of years ago, in many cultures independently throughout the world.

The Metonic cycle is an example of why I hate any ideas of "ancient astronauts"--for example, that the Egyptian pyramids are too perfect and complex to have been built without the help of aliens. Baloney. We are very clever apes who excel at finding patterns. We use language, writing, and mathematics to describe the patterns to others, who can then build on them. What an insult to all those ancient geniuses to claim they were too stupid to do it without outside help.

Related: here's a page from a book-length science comic I was working on before my 2017 fire destroyed my research and documentation for it. We hadn't come up with a title yet, but the working title in my head was Don't Be A Dumbass. I think the project is dead, and some of it is already obsolete anyway, but don't be surprised to see bits and pieces of it float up in my stuff from time to time. 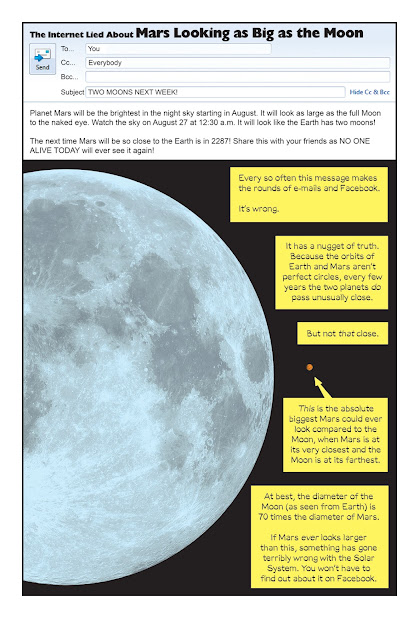