The Trump of Doom! 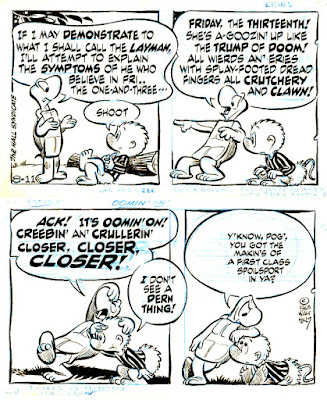 Several years ago I indulged myself by adding this "Pogo" strip to my small collection of original comics art. When I saw its theme, I just couldn't pass it up. This was one of three pieces of art I saved from our fire in 2017; I didn't think to grab any of my own, but I grabbed my Walt Kelly.

(The actual strip isn't stacked 2 x 2, but it fits better on Blogger that way.)

I discovered "Pogo" by reading my Dad's paperback collections from the 1950s. As a pre-teen I didn't get all the topical and political references, but the characters and their world were terrific, Kelly's wordplay and playfulness with the comic strip format were astounding, and his artwork was just about as good as comics could be drawn. If I could ink like anyone, it'd be Kelly (or his contemporary, Gus Arriola).

If you want to know where I come from as a cartoonist, I'd say my DNA is at least a quarter Kelly.