I wasn't sure about posting this one, but experience has taught me that the crafty bits I'm uncertain about turn out to be some of my best-received posts, so here goes.

I mentioned a while ago that I was working on a new project. Don't know what it's going to be yet--or whether it'll be anything--but it's fun to toss around. The story has three main characters with very different objectives and personalities (as characters in a story should). They're thrown together. Fun and drama ensue.
Thinking about what these people should look like, I wanted to capture the essence of their differences in comic shorthand. Now, one of the most ancient tools in the Official Cartoonist's Toolkit is visual contrast. Mutt and Jeff, Maggie and Jiggs, Krazy and Ignatz. Outside of comics, think of Laurel and Hardy. The viewer can tell who's who, and even deduce something of their personalities, just by their sillhouettes.
Playing with that idea, I came up with these three figures, constructed of rectangles, circles, and triangles:
. 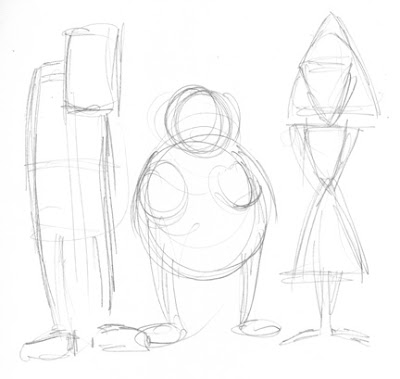 Now, I think even with those basic forms, you could surmise a bit about the characters' personalities. A man made of squares might be rigid and unyielding; a woman made of circles might be kind and nurturing; a younger woman made of triangles might be driven and jumpy. But clumps of geometric figures aren't characters. You need to round off the edges, imagine how a skeleton might work inside their flesh, make them organic. Here's a more intermediate step in the process of turning them into people: 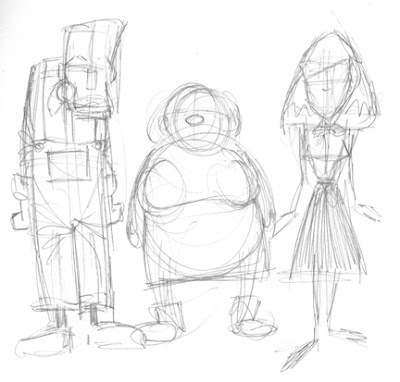 That's just a beginning, not an end. I'll add features and spend some time living with these shapes, trying them in different poses, making sure they can do everything I need them to. I'll flesh them out and draw them until I feel like I've got them streamlined and polished. I'll give some thought to the rest of their universe, and the best tools and media I can use to depict it. Then--if I decide I've really got a story worth telling, which I haven't yet convinced myself--I'm ready to start drawing.
Like I said, I was hesitant to post this. First, because I'm not sure it'll amount to anything. Second, because I don't want to suggest this is the best or only way to do things; it's just mine. Third, because this is elementary Cartooning 101 kind of stuff, and I suspect many readers either won't care or already know it. But it's a start. Or not. Don't hold me to it.
.
Posted by Brian Fies at 6:33 PM

Cool stuff. I always appreciate it when cartoonists show how they approach their work.

I think you're right about Squares Guy being at least unable to sympathize -- perhaps "rigid" or perhaps just unintellectual. Karloff's monster being the anti-example, hence the tragedy in that character.

Circles Woman could be kind or could be obliviously smothering -- I'm thinking of the housekeeper in Heart of the City as a sympathetic version, and I generally agree.

Triangles Woman could be driven but she could also be cute and ditzy and trendy ...

At this stage, these characters are taking shape more in your head than on paper. I think the cartoonist needs to not only analyze the geometry but also what he brings to the drawing table before he is too sure what the readers will see!