I've already taken up too much of my blog and your attention lately bragging on my kids, to their dismay. I'm going to torture them once more by posting two photos, then leave them alone a while. Unless they do something to deserve more bragging. It's up to them.

In the context of blogging about my daughter Robin's sick cat, I mentioned a while back that she spent six weeks of her summer at archeology field school. The cat survived for their reunion and is still doing pretty well, while Robin survived camping in the Sierra Nevada foothills and digging holes in rock-hard soil in 100-plus-degree heat every day. It was genuinely tough physical labor that I think drew on some previously untapped reserves of fortitude. Anyway, we sent along a disposable film camera (an electronic digital camera would not have survived), and just got the photos back this morning: 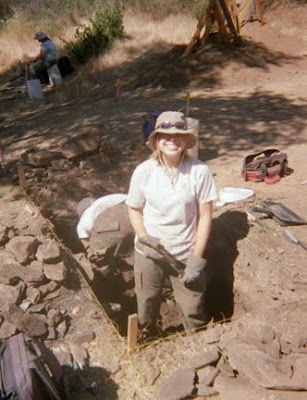 Archeologists coated in the dust of ancient civilizations prepare to break through the roof of the hidden Map Room and use the crystal headpiece atop the Staff of Ra to locate the Well of Souls where the Ark resides.

I also just got a picture of my daughter Laura's booksigning at the SacAnime manga and anime convention last Saturday. It sounds like she, her sister, and a small group of their friends had a great time at a nice little convention. My wife Karen and I made sure she set aside enough copies of her first published work, sure to become a future rare first-edition collectible, to allow us to retire in comfort. 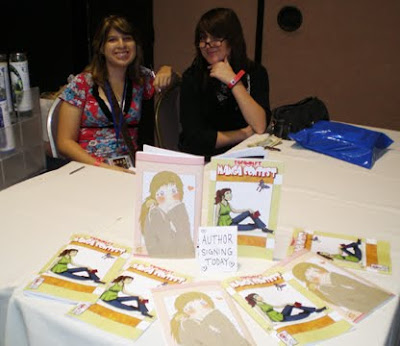 My one-time assistants Laura (left) and Kristen, the first- and second-place winners in the convention's manga contest, ready to sign their opus for fans. A third former assistant, Kristen's sister Kelly, won an art contest at the same event. Unfortunately, I'll never be able to afford their services again.
.
There. I think I've done enough damage for one day.
.
Posted by Brian Fies at 1:26 PM

... so now it's time for your friends to do more damage here in comments!

Ladies, you are wonderful! I certainly hope that your dad keeps us up to date on your accomplishments.

Brian, I loved your caption for Robin's photo. It struck me, though, that if she had bent down at that moment, it could have had interesting consequences for the person behind her.

Their smiles are great.

When they're doing great stuff, they just have to put up with being bragged about! Well done.

Their fault if they keep doin' stuff to make you proud, I say.

Good post! I can't wait to hear how the Well of Souls thing works out.

man, you are so luckyy. what a joy for you to have such a great family.

(remember that as everyone grows older and you begin to lose what little tenure you have as a 'father knows best' kind of guy and become more of the "oh, dad..." kind of guy.