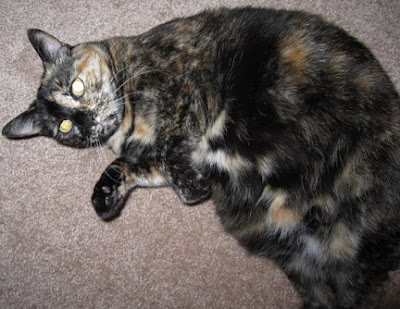 Lookin' for a Tummy Rubbin'

We've had a very sick cat in our household the past few weeks. Actually, Marbles has probably been sick a lot longer, but we didn't notice until she stopped eating and suddenly lost about a fifth of her body weight at the beginning of July.
The diagnosis is hyperthryroidism, which I've learned is common in cats her age (13); the compounding problem is that, in a kind of terrible feedback loop, treating the hyperthryoidism unmasks previously disguised kidney failure. Also common. We thought we were going to lose her a week ago, but forcefeeding and quick application of subcutaneous fluids and appetite-enhancing meds pulled her back from the brink. She's eating again, putting weight back on an ounce at a time (we dusted off a 70-year-old family-heirloom baby scale to track it), and other symptoms are subsiding. I knew she felt better the day she stopped being openly nice to me. But she's still pretty precarious.
Her treatment regimen consists of daily medication to control her hyperthyroidism, administered by just about the coolest drug delivery system I've ever seen: a transdermal gel applied to the inside of her ear (the only unlickable part of a cat not covered with fur). The cat thinks she's getting a happy little scritch while drugs leach through her skin into her bloodstream. This is a fantastic invention! Nobel Prizes for everyone involved! There's a new prescription diet that she hates and we cheat on. To keep her hydrated and take some load off her kidneys, we've learned to inject 100 mL of Ringer's lactate solution into the scruff of her neck every day, a process we all tolerate better than we expected.
Now, Marbles and her twin sister, Rose, really belong (to the extent that cats ever belong to anyone) to our twin daughters Robin and Laura. What makes our situation quite a bit sadder is that Marbles's primary human, Robin, is right now halfway through her university's archeological field school, a six-week dig in the Sierra Nevada foothills. She's out of cell phone range and it's very hard for her to get home, although she managed it last weekend.
You see where I'm going: as much as I love my cats, I love my kids a lot more. This cat will not be checking out on my watch. Marbles and I have made a deal that if she hangs on three more weeks until Robin gets home, she can play it any way she wants after that. Days, weeks, years, whatever.
Of course we'll never let Marbles suffer, and Robin understands that. But I'm confident we'll make it to August, and likely far, far beyond. Marbles gave me her word.
.
Posted by Brian Fies at 2:37 PM

Poor kitty! Hurrah for the awesome Fies household that is doing everything they can to help her.

Absolute agreement from this quarter, ronniecat. And hurrah for Marbles, too. Brian, we administered 100mL of Ringer's sub-q daily into the scruff of tiny Max's neck for a year, and I'm glad Marbles is tolerating it better than he did. But, then again, Max was the most cantankerous six pounds I've ever been around for a protracted period.

We're wishing the best, whatever that may be, for all of you.

Thanks, my friends. Sherwood, I've been amazed how many people I've told about our cat's treatment who've said, "Oh yeah, we did that to our cat, too." It seems like everyone I know has administered sub-q but me. Marbles tolerates it so far but seems to be catching on that certain cues indicate unpleasantness ahead. We'll see how long we can outsmart her.

You'll make good decisions for Marbles, I'm quite sure. Some are painful, some are joyous, all are a measure of love.