You Will Go to the Moon 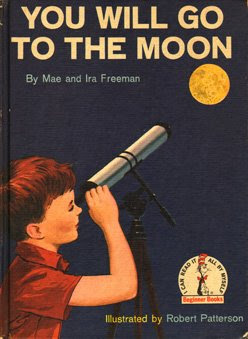 Forty years ago today Apollo 11 lifted off for the Moon, and I couldn't think of a better tribute than to celebrate a book that told me the biggest lie of my life.

You Will Go to the Moon was written by Mae and Ira Freeman and illustrated by Robert Patterson, and I read it a bajillion times when I was a kid. Published in 1959, this Random House Beginner Book soaked through my skin, rearranged my DNA, and prepared me to be a citizen of the stars instead of the little South Dakota neighborhood from which I watched Armstrong, Aldrin and Collins make history. My original copy is long gone, but I found one in a used book store a few years ago and happily gave it a place of honor on my shelf of much more serious and scholarly tomes on astronomy and space exploration. It taught me more than pretty much all the rest together, even though almost nothing in it is right. 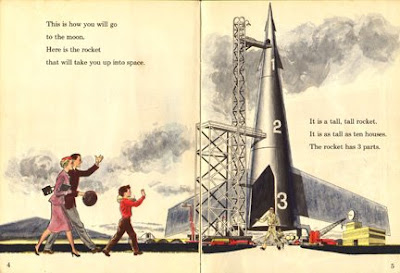 The influence of Wernher Von Braun's vision of spaceflight is strong and obvious--surprisingly so for as late as 1959, when the real manned space program had gotten underway. The fat winged rocket above and the classic doughnut-shaped space station below are pure Von Braunian goodness, so iconic of their time it's easy to forget they were once serious suggestions for actual space vehicles. 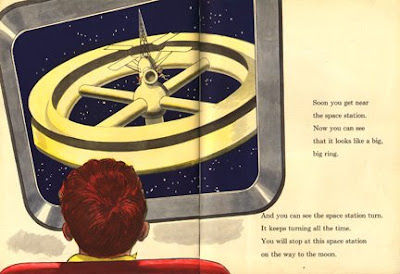 Of course, nothing says "going boldly where no man has gone before" more than drinking a cup of coffee at an orbital soda fountain or watching a Western projected onto a tiny movie screen. I love the idea of a soda jerk in space, complete with white paper hat and
t-shirt (behind the coffee drinkers below, unfortunately obscured by a blotch of childhood graffiti). I wonder what that "help wanted" ad would look like.
. 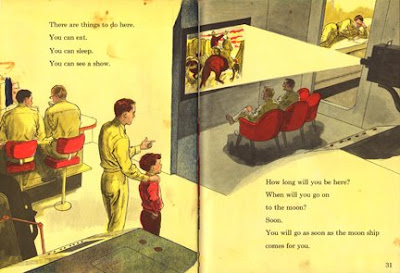 Once your spider-legged landing craft leaves the space station and reaches the Moon, you can pull an accordian-limbed space suit over your red cardigan and bound out to your bubble-topped Moonmobile, ready to explore your new home. 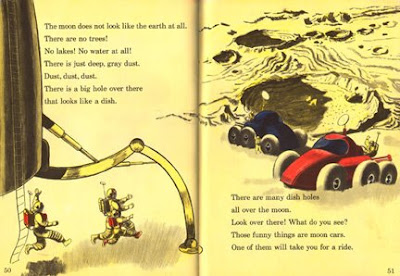 What terrific art! I've seen a later edition of You Will Go to the Moon illustrated more realistically, informed by Apollo hardware and actual lunar landings. I don't think it's nearly as good. If I can't blast off to a space station with a soda fountain and race Moon cars through craters like dune buggies, well, I hardly see the point in going.
.
When Mr. Patterson and the Freemans promised me I would go to the Moon, I believed them. Whatever Happened to the World of Tomorrow is partly a decades-late thank you note to them. I allow myself the indulgence of imagining that a young reader reaching the end of my book might come away thinking like I did 40 years ago. Even if it turns out to be a lie, I expect they'll be forgiving.
.
Posted by Brian Fies at 3:16 PM

Email ThisBlogThis!Share to TwitterShare to FacebookShare to Pinterest
Labels: Making a Book, My Influential Books, Space

Someone needs to plant some artificial trees on the moon, (and maybe a shrubbery or two), so it will look more like the Earth.

I took that book seriously when I was a kid too. It seemed so plausible at the time.

This is Armine Hareyan writing from www.huliq.com. I visited your blog and liked your content.

Would you be interested to send us a guest post on any of the issues related to the topics that you cover in your blog. We will publish it in our site www.huliq.com

In return with each guest blog we will give one link in the author's biline back to your blog. We only ask that the guest post ( we prefer it be a news coverage, sources can be Google News, CNN, MSNBC, Yahoo News, BBC and others) be a unique story and not be published in your blog.

Please let me know if you may have any questions about www.huliq.com.

If you want to consult the topic with me first that's perfectly fine as well.

Thanks for the comments. Armine, I've visited huliq.com and am not sure what you're asking me to do. I don't see any examples of guest blogs or similar commentary anywhere on the site. But I'll take another look and let you know if it looks like something I can do.

I was age 4 when that book came out in the UK. I believed them too.

Oh well, at least in 2001 I helped design and build a satellite. The first one to demonstrate self-healing hardware in space, to deal with radiation damage and long missions.

Maybe my son will.

I googled You Will Go to the Moon for a link in my blog post tonight and chose yours. Thought you might be interested to see where you've been :)

Zoe, congratulations on doing it for real, sort of. I don't think one can underestimate the importance of early inspiration on later careers, even if that inspiration is juvenile or silly. I think if you ask professional astronomers, astronauts, etc. why they wanted to do what they do, a huge majority will attribute it to something like "Star Trek." Or even "You Will Go to the Moon."

Helen, thanks for letting me know! I enjoyed your blog.

Brian, have you seen this photo, from the "Space Stuff" section of Jim's Facebook page?

(Taken while we were down at the launch of STS-118 a couple of years back.)

Ha hahaha ha ha! That's great! Thanks for showing me that. I already knew I liked Jim, now I know why.

Nancy didn't mention how the "You Will Go to the Moon" picture helped to turn me into an internet meme.

Someone at Fark.com used the image as the basis for a Photoshop pic, and it wound up on several other sites, which Digg.com apparently "dugg"...

If you google "How to Pose Like This," I seem to be all over the place! :)

There's one part that did come true -- at one point dad and son are floating in space watching a baseball game -- on a flat-screen monitor!

True enough,jms! I shouldn't take progress like that for granted!