My Wife Blames Me

A cartoonist named Fies has a booksigning coming up August 29, and it's not me.
.
I've blogged about the four young women who assisted me on WHTTWOT: my daughters Robin and Laura, and their friends Kelly and Kristen. I also mentioned them in my book's Acknowledgments. All are excellent artists better at Photoshop than I am, and they did a great job of digital coloring for me.
So the four girls* made plans to attend the Sac-Anime manga and anime convention in Sacramento the weekend after next. As many conventions do, Sac-Anime hosts various art contests, including one for original 12-page manga stories (is "manga stories" redundant? I don't know). The top three finishers get their stories printed in an anthology sold at the convention. In addition, the first-place winner gets a table at the con.
Laura, Kelly and Kristen set to work and each turned out a 12-page story in about a week (Robin was away at her archeology dig while this was going on). That's hard! Of course, their dream result was to finish first, second and third, but the odds of that happening would be ridiculously, impossibly--
Well, they came close. Laura placed first, Kristen second, and someone else third, unfortunately knocking Kelly out of the running. Still! Not bad! Laura and Kristen will spend an hour with the third-place artist signing their book, and all four girls are figuring out what to do with their table. 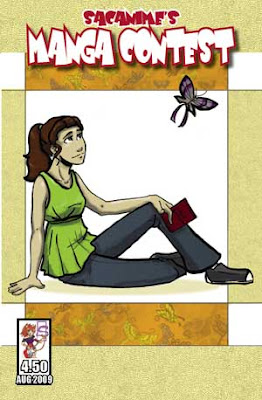 Cover of the book, illustrated by Laura

To head off an easy question, I had nothing to do with it. They never asked me for help or advice, I never gave any, and I didn't even read Laura's story until after she submitted it. In fact, I still haven't seen Kristen's or Kelly's. They did it entirely on their own.

Me? Proud? Maybe just a little, and of all of them. I take it as vindication of my ability to spot talent. Now I just have to live with Laura's sassing that I was twice her age before anyone asked me to sign a book (don't get cocky, kid). As for my wife Karen, she just kind of looks at us all and shakes her head. (She's proud, too.) 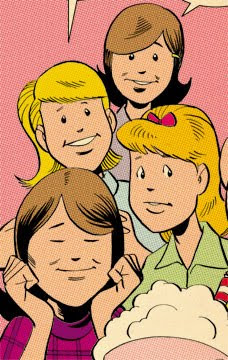 * Forgive my referring to adult women as "girls." I expect they'll still be girls to me when they're all 50 years old.
.
Posted by Brian Fies at 8:38 AM

Of course this means you'll be eating their dust soon.

I agree with Mike; you're DUSTED... but at least it's by family!!
XO,
Nurse Sis

We just spent a weekend with our Goddaughter, who is 14, and who draws and consumes manga compulsively. We talked about the possibility of digital art as a career. I couldn't be more happy if she goes that route. I think I'll send her a link to this to inspire her!

AWESOME! I'm so sad I won't be able to make it to Sac to see it, but great work ladies!