How I Approach Cartooning #5: Arts & Letters

From time to time I thought about putting together a post on cartoon lettering, despite my utter lack of skill or expertise. (I have touched on the topic a couple of times, including my early flirtation with a digital font and my slightly more knowledgable use of the same later.) Then I found a page titled "Comics Grammar and Tradition" at the website of Blambot, purveyor of professional comics fonts, that says everything I would have said plus more, and better.

That page mentions one thing I always look for in lettering, and which in my mind separates the men from the boys (if you'll pardon the expression): the use and abuse of serifs on the capital "I." Serifs are the little horizontal bars at the top and bottom. In proper hand lettering, the "I" should only have serifs when used as a standalone initial or the personal pronoun. An ordinary "I" in the middle of a word shouldn't. It's a subtle matter of emphasis and spacing. Here's an illustration borrowed from Blambot: 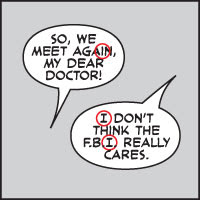 It's tempting to say that misuse of the capital "I" is the hallmark of an amateur, except I see a lot of professionals doing it these days, too. Here's an example from Scott Adams' extremely successful "Dilbert," in which every "I" but the first should be sans serif: 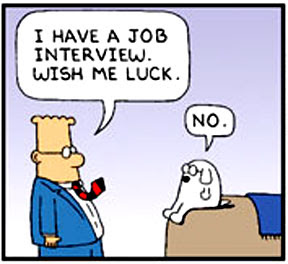 Now, the serif "I" thing has always been more a guideline than a rule (to quote the great Capt. Sparrow), and you can look through old comics and see where even the masters had their own opinions on the matter. For example, Walt Kelly had the quirk of also serifing any "I" that happened to start a sentence. Some used serifs on words like "I'm," "I'd," "I've," etc., and others didn't.

Still, seeing a serif "I" in the middle of a word makes me sad--not because two tiny lines matter much in themselves, but because it represents what I see as the slow decline and degradation of comics art in general. It's a small standard of craftsmanship that at one time every pro paid deliberate attention to. Now few do, or see any reason they should. There are many aspects of modern cartooning for which I'd say the same. Very few cartoonists working today would be fit to clean the nibs of an ordinary journeyman professional working 50 years ago, including me. ("Nibs? What's a nib?") 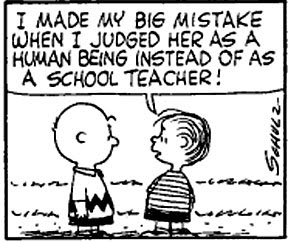 Charles Schulz knew when to put serifs on an "I"

Lettering is an important and overlooked part of the art of comics. I consider my own lettering neat and adequate but not professional-grade, certainly not up to the standards of real practitioners in the field (go visit Todd Klein to get seriously schooled). Mine may have a certain handcrafted charm, and there's definitely something to be said for lettering that reflects the hand and personality of its maker. But as fewer and fewer people really understand or care how text works with pictures on a page, and any yahoo can buy or steal a nice-looking font and start typing away with the Caps Lock key on, it's a dying art.
I'm afraid no one will miss it when it's gone.
Posted by Brian Fies at 10:29 PM

Brian - thanks for this post. All you post on technique I find very helpful. It's amazing what a large learning curve cartooning is. I still do hand lettering, and I'm constantly displeased with the results, but I loathe to give it up because in the time consuming process of doing those letters, I know ideas come to me that make the cartoon better. I'm still struggling with this, but trying to learn from the processs.

Thanks, MK. I know exactly what you mean about the act of hand lettering being part of the creative process, even though I've gone to computer (using my customer font) myself. In my case, I think I gained more than I lost, but I recognize the trade-off.

On the one hand, I don't use serifs on the I when it appears in mid word (not intentionally; I must have picked up on it from reading decades of Peanuts), and I know my writing style compliments my drawing style.

On the other hand, I'd love to switch to a computer font for comic strip writing. I'm constantly re-writing, often up to the deadline, and a font would spare my nerves.

Mark, I meant no criticism. Although I appreciate the craft of hand lettering, I'm no purist myself anymore, having gone over to the digital dark side myself (for lettering only; my art is still all hand-drawn). You really oughtta try it . . .