Yesterday my buddy Otis Frampton, creator of the Oddly Normal series, interviewed me for a podcast called "Words & Pictures" that he and inker Marc Deering do together. Otis is a good friend even though, as he noted in the interview, we’ve only actually met about four times. But the last time we met he bought me dinner, which means we’re friends for life whether he likes it or not. He interviewed me for about an hour and I felt like we were just getting started.

Otis is a very thoughtful writer and artist, by which I mean he actually analyzes how comics work and how he can make his own work better. I find that to be rarer than you’d expect. He believes, as I do, that creating comics or graphic novels is primarily an exercise in writing, even when the writing takes the form of images. Pretty pictures are nothing without characters, stories, meaning, and emotion behind them. A good comics creator has to be skilled in all the tools any writer uses plus the additional tool of thinking and communicating in pictures. Sometimes it’s a real brain-buster.

If you’re interested in hearing a couple of guys ramble about comics and, well, me for an hour, this may be the podcast for you. (It takes a while to download.) Otis had some good questions that made it an enjoyable conversation for me. I haven’t listened to the podcast myself yet—I hate the sound of my recorded voice and, after all, I heard the whole thing in my head the first time—but don’t recall saying anything stupid or regrettable. I’ve also enjoyed the previous podcasts featuring Otis and Marc, and hope there'll be many more "Words & Pictures" to come. 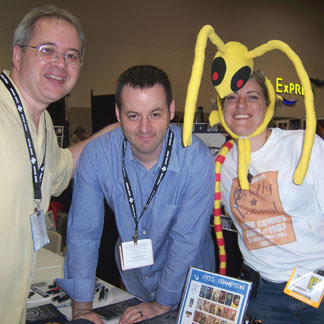 Me with Otis and his obviously supportive wife
Leigh at the 2007 San Diego Comic-Con.

Hi Allison!
I meant to mention this earlier: I found out via Christmas card that a good friend of mine from high school follows this blog. That’s very nice, although it also feels a little strange when people who know me in real life cross over into my Internet life. Once in a while my neighbor Larry will mention something and I’ll think, “How did he know about that? Oh yeah, I told everyone on the planet . . .” Worlds collide. Anyway, hi Allison, and my best to you and your family!

Hi, back to you Brian. Pre-ordered WHTTWOT form Amazon. I'm looking forward to reading it and sharing it with Tyler.
All the Best,
Allison