You Are (Almost) There

Photographer David Bergman took the wide-angle photo above of President Obama's inauguration. It's nice, but doesn't look terribly impressive--until you learn this single image is actually composed of 220 individual close-up pictures. What that means is that you can zoom waaaaaaaay in on any part of the image. Pick out all the ex-Presidents and dignitaries sitting behind the podium. Catch a guy in the Marine Corps band napping. Find Aretha Franklin's hat. Pick a spot far, far back in the crowd and make out individual faces. If you were there that day, you could probably find yourself in this picture.
.
It's quite a contrast to this photo of Lincoln's inauguration, which I believe was the first one ever photographed. Bergman's "gigapan" image, as it's called, is a genuine contribution to history.
. 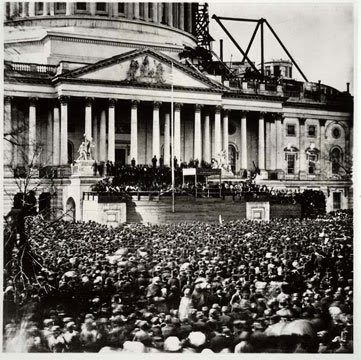 Go here to see the big picture when you've got some time to kill. Be patient while it loads; I can almost guarantee you'll find it worth the wait..
Posted by Brian Fies at 11:35 AM

Thanks for this! CNN has been showing this technology all week but either they never give the website or the close-captioners don't include it. It's been making me crazy. I finally got to see it - neat! Did you check out the users' "snapshots" with comments below? Some are quite funny. I love that somebody caught that a gaffer had written on a piece of the scaffolding, "Two gaffers walk into a bar. The second has gaff tape."