I had a great time at the Schulz Museum's Cartoonist Sketch-a-Thon this afternoon. The event drew a nice turnout, with a steady, comfortable flow of nice people interested in watching a bunch of cartoonists draw and talk (sometimes simultaneously!). 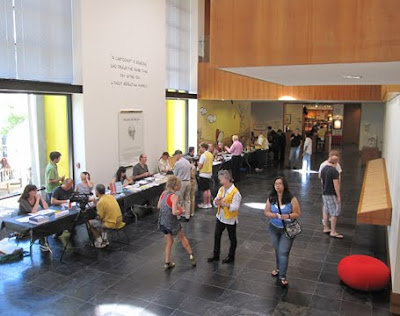 An overview of the museum's Great Hall, with cartoonists lined up against the wall. I'm down by the man in the pink shirt. This is early; the crowd got heavier. All photos by Karen Fies (thanks, Sweetie!) 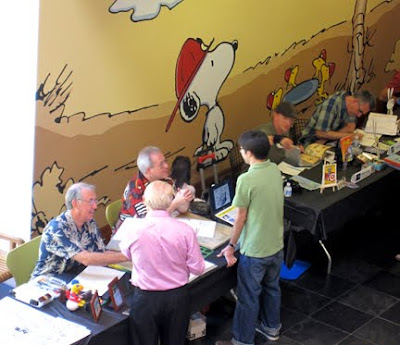 A closer look. Sharing my table in the blue Hawaiian shirt was cartoonist, teacher and actor Brian Narelle, whom I'd met before and was pleased to see again. Sitting to my left (the photo's right) are animator Mike Gray and cartoonist Jonathan Lemon. The guy in the green shirt to whom I'm talking is Andrew Farago, curator of the Cartoon Art Museum in San Francisco. I was especially happy to reconnect with Andrew and his wife, cartoonist and writer Shaenon K. Garrity, who was one of the tooning participants (in the top photo, she's at the far left next to the guy in the green shirt--hey, there he is again!). I cannot believe how gray my hair is. It's positively luminescent. 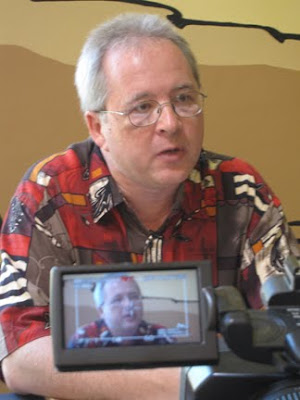 Being interviewed for a local television program. That's my "cogent and insightful" face. Seriously, when did I get so gray?
. 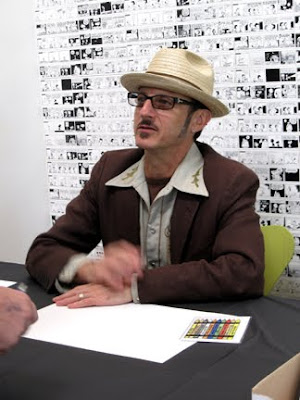 Dan the Man Piraro, award-winning syndicated cartoonist and international bon vivant. I've never seen a cartoonist who looks more like one of his own drawings, and not just because Dan frequently draws himself into his strip "Bizarro." As I mentioned a few days ago, Dan and I have met before and had a few minutes to get reacquainted today. His table was packed all afternoon, and his follow-up lecture/comedy act filled the museum's theater.
.
All the participants were asked to contribute a drawing celebrating the 60th anniversary of "Peanuts," and I cleverly got a head start by penciling mine at home before I showed up. I assumed I could ink one simple drawing in a few hours. I assumed wrong. People kept me busy enough that the hours passed in a flash and I had to take it home to finish.
. 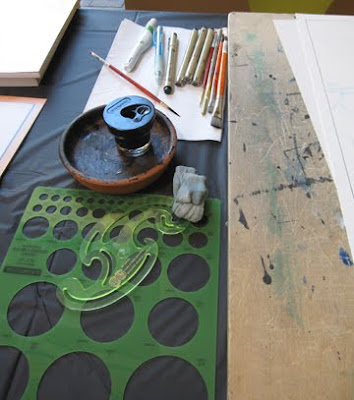 Some of the crap--er, materials and tools--I brought to draw with. A couple of artists wandered by and marveled that I still use brush and ink. I guess for them it was kind of like visiting a Renaissance Faire to watch an artisan make chain mail. 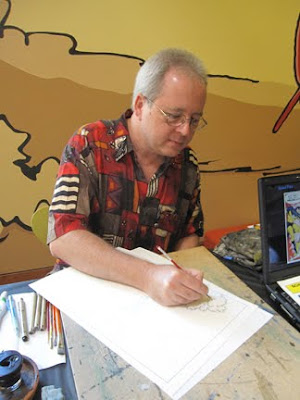 Getting started on my 60th Anniversary Sketch for the museum.
And . . .
. 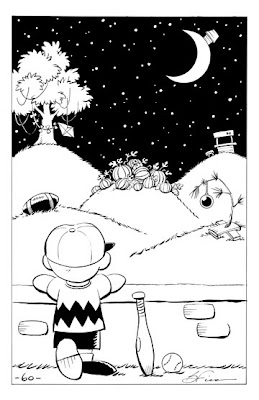 Finished at home later. (Click to see it bigger.) I planned to do some shading with a light gray wash, and actually had it diluted out to just the tone I wanted, but decided to leave well enough alone. I liked this fine. Also, the museum plans to collect the drawings into a little souvenir book of the event, and I wasn't sure they'd be able to reproduce the graytones. So I stopped.
.
Karen and I had a really good afternoon. We sold a few books and talked to some nice people, including cartoonists, museum volunteers, Jeannie Schulz, and even some kids I remembered from my cartoonist-in-residence gig last January. Afterward we crossed the street to the ice arena's cafe and sat in the sun slurping root beer floats. My only regret is that I was so busy I didn't have a chance to meet a couple of people I really wanted to, including comic book artist Brent Anderson and cartoonist/colorist Lark Pien. I sat 20 paces away and never had a moment to say "hello." Maybe someday.

Thanks to the museum and especially Jessica Ruskin for inviting me and pulling the Sketch-a-Thon together. I promise I'll turn in my drawing in tomorrow.

Your tribute is wonderful -- in fact, my eyes are still stinging just a little bit.

And you've got a way to go before you catch up with me in the gray hair department, whippersnapper.

Karen, lovely pictures. Brian, I love your tribute. . . and, by the way, we say "silver;" silver, not gray.

Love the tribute, Brian. Now, are you going to show us the depressing version? :)

Great post! Wonderful event. Fabulous tribute, although they made me hand mine in before they would let me leave!

Jonathan, thanks! They let me leave with my drawing because they know where to find me. Nobody wants Jeannie showing up at their door to collect.

Wonderful tribute drawing. It's all there: The "sincere" pumpkin patch, the kite-eating tree, the infamous "I killed it!" Christmas tree, Lucy's "Psychiatric Advice" stand, Snoopy's house, and the other side of the wall the gang propped themselves against when they talked.
(Plus you get bonus points for keeping stars off the shaded part of the moon.)

Thanks, Nam. Putting stars inside a crescent moon is a mistake I am incapable of making.