Comic book artist "Gentleman" Gene Colan has died following a few rough years of poor health and family hardship. He was 84. His wife Adrienne preceded him in 2010.

I was a great admirer of Mr. Colan's work. I can't claim to have known him but I did meet him, in a moment that was and remains very important to me. He and I won Eisner Awards the same year (2005). After the ceremony, all the winners were asked to line up for a group photo. Talk about herding cats! It took quite a while just to get everyone to stop chatting with their friends and cooperate with the photographer. Knowing no one, I obediently sat down and found myself waiting patiently next to Gene. 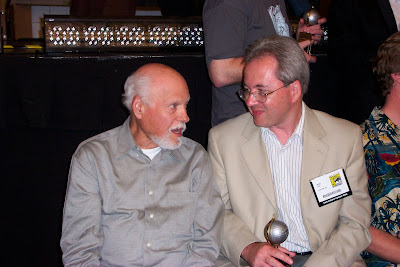 In the years since, I've had other opportunities to meet people whose work I loved as a comic-book-reading kid, but Colan was my first and I was nearly star-struck dumb. But he and I struck up a conversation and, although he had no idea who I was, he talked to me like a peer who deserved to be there.

I wish I could've recorded that conversation to replay and remember now. I was pretty overwhelmed that night, my head abuzz, and I honestly don't recall its details. What I'll never forget was Gene's warmth, encouragement, humility in the face of my fannish praise, and evident interest in meeting a new cartoonist and learning about his work. Gene Colan taught me the secret handshake and welcomed me into the club.

I've got to say a word about that picture above. The whole time I was talking to Gene, I was glancing around the room trying to find my wife Karen. I needed someone to witness this "OMG I'm talking to Gene Colan" moment. At last I caught her eye, gestured her over with an urgent nod, and mimed the universal "finger clicking the shutter" gesture. She understood; I had my proof.

I first saw Gene's work in the pages of Marvel's "Avengers" series. He wasn't best known for doing that book--in that period he was much more closely associated with "Daredevil" and "Iron Man"--but I read and collected the "Avengers" so that's where I found him. He had an instantly recognizable style unlike anyone else's in the business. His compositions and figures were fluid, like they were poured onto the page with liquid mercury. Arms and eyelids and staircases and cityscapes thrust back and forth between shadow and light. His art was energetic and peerlessly graceful. It was also unique. In a business in which success is quickly imitated--where originals like Neal Adams and Frank Miller and Alex Toth have dozens of clones--no one ever copied Gene Colan. No one could. 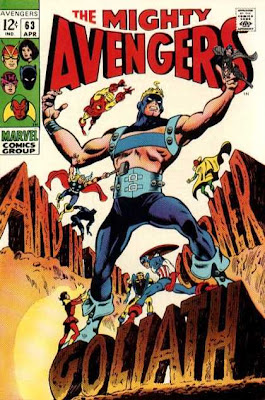 Where I first encountered Gene. 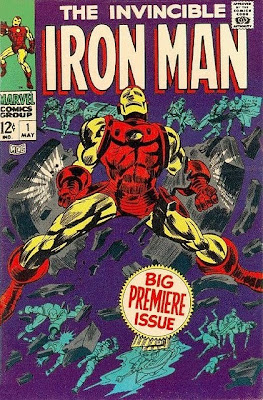 Probably the most iconic image of Colan's career, the cover of "Iron Man" #1. 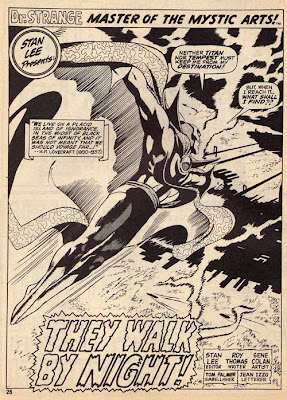 The opening "splash" page of a Doctor Strange story.

It was only years later, when I had a chance to see some of Gene's pencil work both in person and reproduced, that I really understood what he was doing. A quick explanation about how comic books are made: typically the art is produced by a penciller, who draws the action in (duh) pencil, and an inker, who goes over the pencil lines with ink to make them dark enough to reproduce. Inking is sometimes derided as "tracing" but it's not. A good inker interprets the pencils to convey light, shadow, weight, depth, motion, etc. Gene Colan was a penciller who must have been either an inker's dream or nightmare, I'm not sure which.

Comic book line art is black and white. You can mimic shades of gray with cross-hatching or dot screens, but by and large you don't find watercolor-like ink wash in conventional comics. Colan's gift/curse was that he really knew how to draw, with a full range of texture and tone very difficult to reproduce in the binary black/white medium of India ink. A good inker could approximate what Colan achieved with a pencil; a bad inker rendered it muddy and incomprehensible. 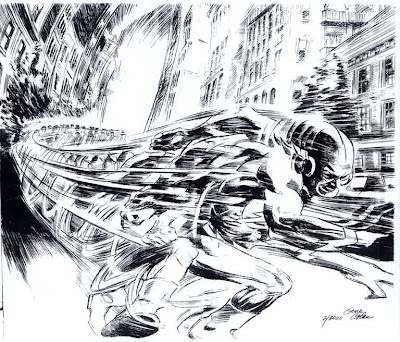 The Flash by Gene Colan. Notice not just the fantastic sense of motion he captured in the running figure, but the cinematic blurring and warping of the background. 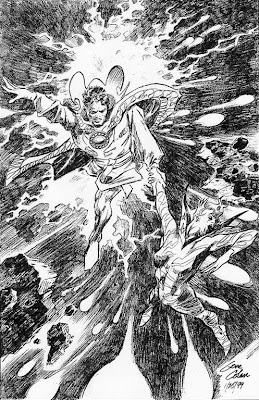 Dr. Strange and his apprentice Clea, displaying Colan's mastery of light and dark. Imagine sitting down to ink this in black and white. How could you do it? Where would you start? 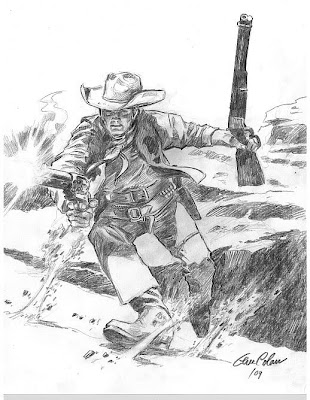 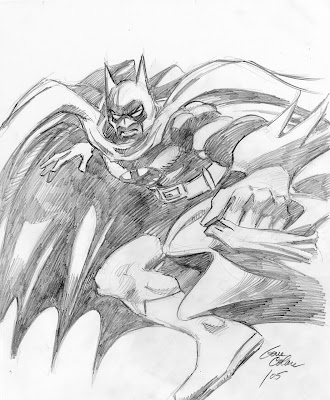 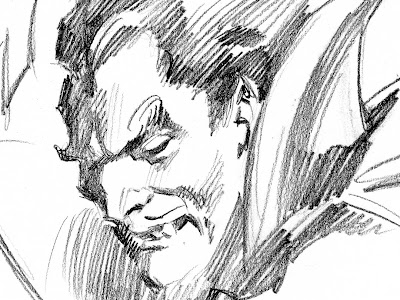 A Colan sketch of Dracula. 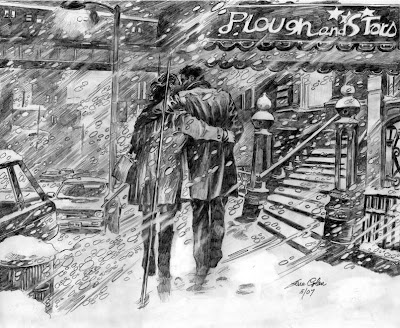 I don't know what this is from, but it shore is purty.

In recent months Colan's affairs were looked after by Clifford Meth, who kept Colan's fans updated on his failing health and auctioned Colan's art and books to help pay for his medical and hospice care. I bid what I thought I could afford on a couple of items I didn't need, and was happy to be outbid because that meant more money for Gene. This morning Meth wrote a nice remembrance of his friend. As I said, I didn't really know him, but I loved his work and I sure am glad I had a chance to tell him that. 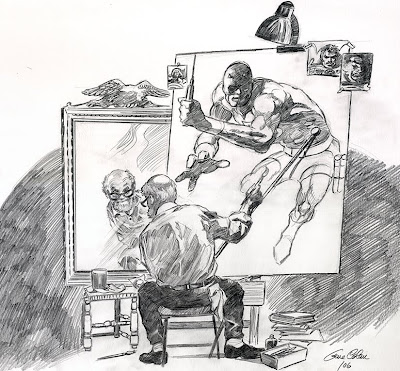 How wonderful that you got to meet him. He sounds like a true gentleman. And his work is beautiful.