The Team Cul de Sac auction of original comics artwork to benefit the Michael J. Fox Foundation and Parkinson's disease research ended last night. The result: 148 pieces of art brought in $47,107.07, a total that includes hefty buyer's premiums (the auction house's cut that's automatically added to bids). Heritage Auctions doesn't make it easy to find the actual bid totals minus the buyer's premium, but figuring that the premium adds about 20%* yields around $39,000 actually raised for the cause.

My drawing went for a bid of $130 ($155.35 with buyer's premium). I was happy with that! It's respectable enough that I wasn't tempted to bid it up myself. I actually bid on a couple of other pieces but was bested on both. That's all right. More money for research. That said, there were still a lot of bargains at the end of the night and I was genuinely surprised by how little some of the lots went for.

I have no idea who won my comic but, whoever you are, you're welcome to contact me if you want to say "Howdy" or have any questions (especially about those white spots I wrote about last week). I hope you enjoy it and thank you for your support of Team Cul de Sac.

If you missed the auction or got outbid, you can still always buy the book! Being part of Team Cul de Sac has been one of the nicest benefits of my cartooning semi-career and a real honor. Thanks again.

EDITED TO ADD: After posting this, I saw that my friend Mike Peterson did a superior write-up of the auction at his Comic Strip of the Day blog (where I also saw that Mike outbid me on one of the pieces I tried to win!). Go read that, and while you're there read Mike's other critiques and essays inspired by his good taste in comics. He's good. 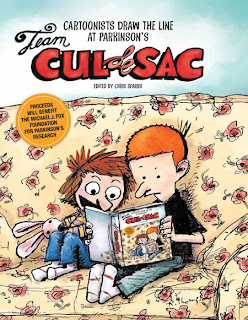