The Prodigal Pages Return, plus Armstrong

﻿﻿Eight pages of original artwork from Mom's Cancer that I haven't seen in nearly five years found their way back home today. These are the pages I loaned to the Norman Rockwell Museum in Stockbridge, Mass., for their exhibition "LitGraphic: The World of the Graphic Novel," which was probably the best collection of its type I've seen, covering a wide swath of comics history, creators and styles, from Lynd Ward in the Twenties to Eisner in the Fifties to Miller in the Eighties. And little ol' me in the Twenty-Aughts. ﻿
﻿

Karen and I attended the opening reception at the Rockwell Museum in November 2007 and had a terrific time. As I recall (and may recall incorrectly), LitGraphic wasn't originally intended to become a traveling exhibition but was so well received that the Rockwell folks decided to put it on the road. It subsequently went to five more museums: the Toledo Museum of Art in Ohio (where I was invited to speak at the opening), The Huntington Museum of Art in West Virginia, the James A. Michener Art Museum in Pennsylvania, the Fitchburg Art Museum in Massachusetts, and the Munson Williams Proctor Art Institute in New York. As I too-frequently joked, my drawings live a more exciting life than I do.

Friend O' The Blog Jim O'Kane put together this terrific video when he and "Captain Girlfriend" Nancy went to see LitGraphics at the Fitchburg Art Museum in 2011.

What a wonderful, heady, unexpected honor it's been! On the long list of things I wish I could tell Mom just to watch her shake her head and smile quietly like she knew it all along, having pages of her story exhibited in art museums is pretty close to the top. Martin Mahoney, Stephanie Plunkett, and everyone I've dealt with at the Rockwell Museum have been extremely gracious and professional, treating my little sheets of two-ply Bristol with the same care and respect they'd give a Van Gogh.

And now the Prodigal Pages have returned! While I'm glad they've had an adventure, I'm surprisingly happy to have them back. I may kill the fatted calf in their honor. Or at least grill a couple of burgers on the BBQ tonight. 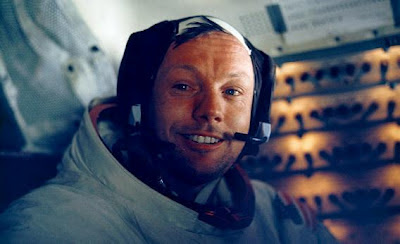 I haven't written anything about Neil Armstrong because I didn't think I had anything original to add, except that the news made me the saddest I can remember being about the death of someone I didn't know.

Of course I'm sorry that the people who did know Armstrong have lost their spouse, father, friend, colleague--but honestly that's a small part of it. I'd be mourning the death of the First Man on the Moon no matter who it had been.

But thank goodness it was Armstrong, who turned out to be pretty much everything you'd want in an American hero. Brave, quiet, humble, quick to credit everyone but himself for his accomplishments. Some writers have observed that, with one or two exceptions, each pair of astronauts chosen to land on the Moon comprised (perhaps deliberately?) a warm, spontaneous, creative pilot working under a cool, methodical, unflappable commander. In essence, NASA manned every Lunar Module with a Kirk and a Spock, but put Spock in charge. Not to deny Armstrong an iota of humanity, he was a wonderful Spock.

Now, I love Buzz Aldrin. I'm glad we have Buzz Aldrin out there punching Moon-hoaxers' noses, dancing with the stars, and woodenly acting with Tina Fey. Buzz hasn't had anything to prove to me since 1969 and however he wants to enjoy the years since is all right with me (not that I haven't sometimes slapped my hand to my forehead and muttered "Oh, Buzz..."). But bless his heart, this is not something I'd want to see the First Man on the Moon doing:


Armstrong wasn't as reclusive as was widely perceived--he taught aeronautical engineering, did occasional speaking engagements, and cooperated with a good biography (First Man) of himself--but he didn't sign many autographs or speak often to the press. Comedian Robert Klein joked that Armstrong would've been set for life if his first words on the Moon had been "Coca-Cola!" but it evidently never occurred to him to cash in (with one blemish: he did a commercial for Chrysler in 1979, explaining that he wanted to support a troubled American auto company and sincerely admired their engineering). As much as I wish I'd had the chance to shake his hand and tell him what he meant to me, it seems even more fitting that he never gave me the opportunity.

Twelve men walked on the Moon; eight survive. They're all old now, the youngest born in 1935. As much as we might wish otherwise, we're going to lose them all soon. And not just them, but the thousands of colleagues who launched them a quarter million miles there and brought them safely home. The body of knowledge that's about to wink out of the world is enormous and irreplaceable. Someday we'll want it back, and it won't be as simple as pulling the old Saturn V blueprints out of the cabinet. An era passes.

Ten thousand years from now, the only person from my lifetime whose name every school kid will know will be Neil Armstrong. I feel as lucky to have witnessed him making history as if I'd sailed with Columbus or hiked with Lewis and Clark. It was a privilege.

Not sure how to express this, but your moderate voice is your greatest strength. It's moderate, not "bland" or "understated." It's not the purposefully affect-free voice of This American Life -- "I'm too hip to inject emotion into my renderings." It's a very natural way you have of expressing even deep feelings without becoming maudlin or mawkish or trying to draw us in by tugging on obvious heartstrings.

In writing, it's called "finding your voice" and it's what made "Mom's Cancer" so much more powerful than it might have been in other hands.

In reflecting upon the legacy of Neil Armstrong, it allows us to see both the affection and respect in which you held him, and it not only adds to the effectiveness, but spells the difference between something we read and say "Hm" and something we genuinely care about and empathize with.

And I met and interviewed Alan Shepard. It was awesome.

That's very nice of you to say, Mike. I try. Thanks.

I'll bet Shepard was a hoot.

Thank you, Sherwood. And all my best to Mrs. Gorsky.

What Mike and Sherwood said, +1.

I don't know how it's possible, but I had never seen the photo of Neil Armstrong that you reproduce on this page until he died. Then, it seemed to be everywhere. And I am so moved by it - everyone knows Armstrong's greatest strength as a test pilot and an astronaut was his unshakeable cool, his nerves of steel, his almost clinical approach to these things. But in that picture, his face is a portrait of wonder and amazement and sheer joy.

Husband and I talked a lot about Neil and what he had done after they announced that he had died. We agree with you that we are so glad we lived in a time with him. Someone - it may have been the NASA twitter account - tweeted that Neil Armstrong had now reached the stars. I can't think of a better thing to say than that.

Yeah, I chose that photo of Armstrong because it seems very human: happy, satisfied, maybe even exhausted. You can read a lot (maybe too much) into his expression but I think I like it because it seems a lot like ours would be: "Holy crap, can you believe it?!"