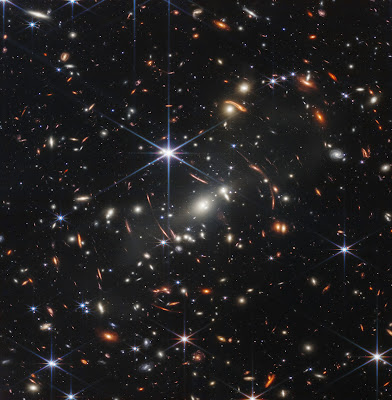 I realize nobody's clamoring for a graphic novelist's take on the first image from the James Webb Space Telescope. Nevertheless.... I was also a physics major and science writer and amateur astronomer, and wanted to offer a straight take on why this is damn cool.

First, JWST is simply the best telescope in history, and sees farther--and therefore further back in time--than any scope ever has. Hubble couldn't get this view.

Second, JWST operates in infrared, the invisible redder-than-red wavelengths humans can't see. Earth's atmosphere is especially good at blocking infrared--hence global warming--so, except for a few smaller space telescopes, we've never really seen the universe in these colors before (the colors in the image are false colors made to look approximately how we'd see them if we could see them). That alone opens up a whole new universe to us.

Third, everything in this image, except the bright stars with six spikes, is a galaxy formed shortly after the Big Bang. (The stars have six spikes because JWST is made of hexagonal mirrors!).

You've noticed that some of the galaxies look curved and stretched, arcing around the center of the image. That's gravitational lensing. The little galaxies are so far away that their light is bent by the gravity of other galaxies between them and us. The in-between gravity distorts their images like a funhouse mirror. In fact, it's possible that one distant galaxy is responsible for multiple distorted galaxy images as its light is bent in different directions on its way to us. That's something astronomers will be looking for: are two or three or four of those smears actually pictures of the same galaxy?

There's no intuitive reason that gravity should bend a beam of light. Light--a photon--has no mass, and only objects with mass attract each other gravitationally. But Einstein's General Theory of Relativity says that gravity bends SPACE. Not light, but the space that light travels through. In a strong enough gravity field, the shortest distance between two points isn't a line, it's a curve.

So this image is a couple of things: it's proof (yet again) that Einstein was right. And it's an actual, honest-to-goodness photo of a space warp.

There've been many other photos of gravitational lensing; this isn't a first. But it's the prettiest, cleanest, clearest one I've seen, and the SCALE of this photo is stunning. The farthest galaxies are just about as far away as it's theoretically possible for us to see, while the galaxies whose gravity is warping space are somewhere between that frontier and our little telescope, a mere million miles out, bobbing on the far side of the Moon.

And here's a high-res version from NASA!