Google Alerts are strange and wonderful things. Scanning the web for key words and phrases--in my case, "Whatever Happened to the World of Tomorrow"--wherever they turn up, the alerts often unearth odd little jewels from other lands or the distant past.

Today, my Google Alert netted me an October 2009 blog post from the Matamata Public Library in New Zealand. Describing the library's collection of graphic novels, librarian Nick called WHTTWOT "an example of a graphic novel which isn't just a novel in comic form but a serious piece of writing which has depth and entertainment." The library has also included my book in a short list of "favourite books" on its site's sidebar.

Matamata is a community in northern New Zealand of about 12,000--6,000 in the township itself and another 6,000 on surrounding farmland. I'm delighted to learn that the area's bucolic beauty earned it a role as Hobbiton, verdant village of the Hobbits, in Peter Jackson's "Lord of the Rings" movies. I'd love to visit it someday . . . maybe stop by the library while I'm in the neighborhood.

I've written before about how publishing a book feels kind of like raising a child and sending it out into the world, never knowing quite where it's going, what it's up to, or what sort of riff-raff it's associating with. Once in a while you get a cryptic postcard: a note from a reader, a brief review. This postcard, mailed half a year ago and postmarked Matamata, is one of the neater ones I've received. If anyone from the Matamata Public Library finds this (maybe via Google Alert?), thanks. 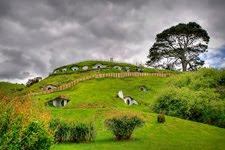 Beautiful Matamata: land of Hobbits and librarians who like my book.
.
Posted by Brian Fies at 7:51 AM

This is so cool that I can hardly scrape up words to do justice to its coolness.

If anything I had ever done had a connection to the hometown of hobbits, I would figure that my life had been worth the trouble, no matter what else I might have done.

Congratulations, Brian. The rest of your life is now gravy. You can use it for good, if you don't mind being trite, or you can be entertaining with it. Your call.

I plan to devote the rest of my life to searching for the Ring. Matamata seems as good a place as any to start.